The explosion occurred at 8 a.m., said Daniel Wegner, deputy fire chief for Sedgwick County. As a result of the blast, 11 people were taken to hospitals and four were treated at the scene, said John Gallagher, the county’s EMS director. No one was killed, but one person had potentially serious injuries, he said.

The explosion was felt nearly 2.5 miles to the northwest, witnesses said.

Eight of the injured people were taken to Ascension Via Christi St. Francis hospital. By early afternoon, four had been treated and released, three were in serious condition and one person was in critical condition.

The company has accounted for all of the workers and visitors who were at the plant at the time of the explosion, said Stephanie Harder, a spokeswoman for Beechcraft’s parent company, Textron Aviation.

Wegner said a 3-inch liquid nitrogen line ruptured. The rupture was contained, but gas continued to vent, although it posed no risk to nearby residents, officials said.

“The plant closed or shut down for the holiday season, so the numbers that would have been here, were not, so it was a skeleton crew,” Wegner said.

The cause of the blast is under investigation.

The explosion comes at a difficult time for the aircraft industry in Wichita, which is a major sector of the Kansas economy. 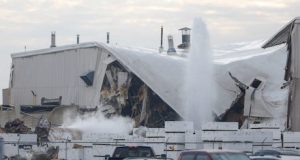 There was a partial roof collapse after an explosion at the Beecraft aircraft manufacturing facility in Wichita, KS.
Source: AP

Harder said the structure where the explosion happened is part of a complex of buildings and houses the business’ composite manufacturing and experimental aircraft.

The federal Occupational Safety and Health Administration is at the plant, said Sedgwick County Sheriff Jeff Easter. The state Fire Marshal’s Office and the local lodge of the International Association of Machinists and Aerospace Workers didn’t immediately respond to phone messages.