Another Fire at NJ Paper Plant 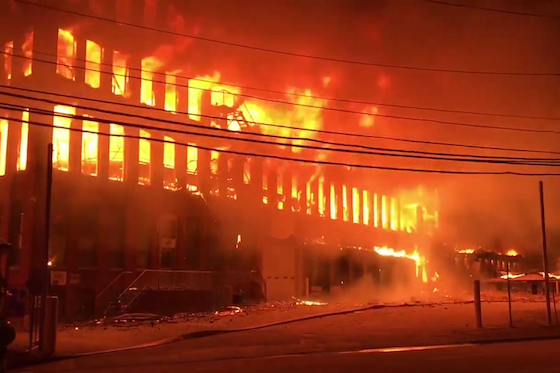 One of the remaining Marcal Paper buildings caught fire Tuesday as a blaze tore through an electrical room in what’s left of the plant in Elmwood Park, NJ.

The second blaze at the site in less than a month brought out firefighters from several towns but also arson investigators from the Bergen County Prosecutor’s Office.

Less than a month after a huge blaze consumed most of the plant, Tuesday’s blaze broke out in a five-story building off Market Street and River Road around 11 a.m.

It shot to three alarms – with some minor explosions – but was knocked down quickly and under control in 40 minutes.

Firefighters from Fair Lawn, Lodi, Maywood, Rochelle Park and Saddle Brook were among those who joined their Elmwood Park colleagues.

A Bergen County Hazardous Materials Unit also was requested as a precaution.

Two people were inside the building at the time of the fire, but neither person was hurt, said Police Chief Michael Foligno.

Traffic on Route 80 was temporarily halted in both directions.

On January 30, a massive blaze broke out in a warehouse burned for hours at the NJ paper plant.

Fire crews got the call to the Marcal Paper Mills, as flames visible from miles away consumed the building.

The roof collapsed by 6:30 p.m., and at one point, the “Marcal” sign, which has been visible along Route 80 since the 1940s, collapsed, said Elmwood Park Mayor Frank Caramagna.

Authorities said there were no injuries in the blaze. Two hundred people work at the mill. The cause of the blaze remains under investigation.

The plant, which sits about 11 miles west of Manhattan, survived several fires over the years. In 2017, more than 100 firefighters were called to extinguish a five-alarm blaze at the plant.