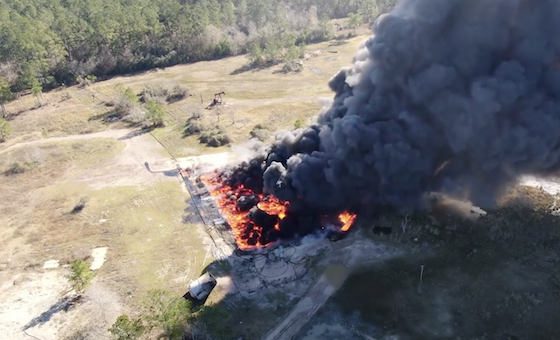 Oil tanks burn after an explosion at a small independent oil company in Liberty County, TX.

One oil tank exploded and ignited a fire in another sending a huge plume of dark smoke over part of Liberty County, TX, Tuesday.

Little is left of the tanks following the fires after the blaze broke out 11 a.m. along County Road 2018 near Daisetta.

Several fire departments responded to the scene, some still remained even after the flames were extinguished.

A shelter-in-place order was issued for residents near the site. Shelter-in-place is the instruction given in an emergency where hazardous materials may have been released into the atmosphere. This precaution aims to keep people safe while remaining indoors.

There were no injuries reported in the incident.

There were two tanks along the road when one of them caught fire, said the Liberty County Sheriff’s Department.

Travis Yust, whose family owns the oil tanks, said 300 barrels of oil were lost, but the rest was contained.

Yust said his father owns the tanks for the family’s small independent oil company, which produces about one to four barrels a day. The loss was devastating, he said.

The family believes static electricity could have caused the explosion.

The Texas Railroad Commission is investigating.