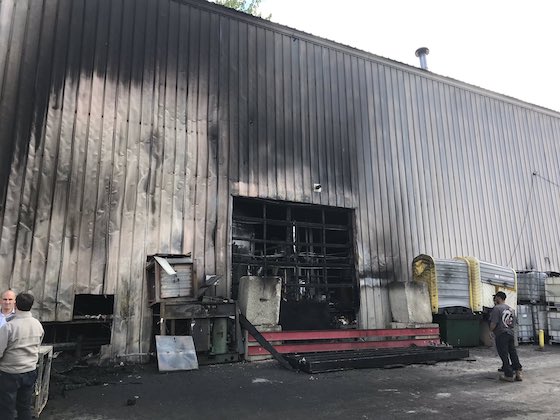 There were no injuries, said Captain Joe Kearns.

The building, approximately 100 by 300 feet, is used as a cooking oil processing plant. The fire started inside the warehouse, and burned through a wooden garage door. The fire came within feet of four 250-pound propane tanks that were located just outside the garage door, Kearns said.

Two engines, a ladder truck and an ambulance arrived at the scene shortly after a passerby reported the fire at 2:50 a.m. No one was inside the building at the time, Kearns said. The Andover Fire Department was on stand-by at the scene.

“It was a substantial amount of fire when we got there, but we were able to knock it down pretty quickly,” Kearns said. The fire was out within roughly 45 minutes.

The cause of the fire is still under investigation. Kearns said there is a considerable amount of damage to the building, but is unsure what repairs will cost.