A two-day cleanup operation ended Thursday at a Reading, PA, private label shampoo and cosmetics maker after two fires melted plastic drums containing chemicals which allowed them to mix resulting in the release of noxious fumes.

The investigation into two separate fires that melted the plastic drums is expected to extend into next week.

Reading Fire Department personnel blocked off the intersection next to Cospro Development Corp., Tuesday night after putting out a fire in the basement of the building Tuesday afternoon. 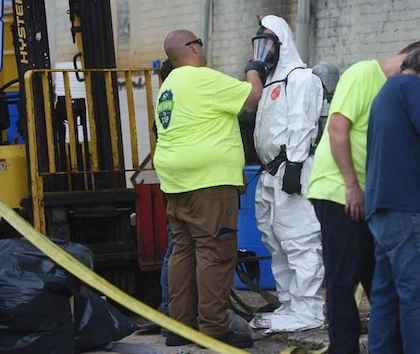 Workers geared up in HazMat suits remove chemicals from the basement of the building.

The intersection of Front and Washington streets remained closed Thursday afternoon, but city Fire Marshal Jeremy Searfoss said he expected the cleanup to be completed and the streets to be reopened by Friday morning. Fire department personnel remained there as a hazardous materials contractor continued the cleanup.

Workers for ACV Enviro, Harrisburg, who were covered head to toe in special suits with self-contained breathing equipment, removed chemicals from the basement of the building at 101 N. Front.

Cospro formulates and packages shampoo and cosmetics for use as private-label products, according to its website

The fire was discovered about 1:30 p.m. Tuesday in the basement. A second fire broke out later in the ceiling tiles of the basement.

Between the two fires, Searfoss said, containers of chemicals melted and the contents leaked and commingled on the basement floor.

The Berks County Department of Emergency Services sent its hazardous materials incident unit to coordinate the cleanup, and the Reading Police Bomb Squad was also deployed.

“The bomb squad came and removed a material called nitrocellulose, which is known to be extremely flammable,” Searfoss said.

Also known as cellulose nitrate, flash paper and guncotton, nitrocellulose is a highly flammable compound formed by exposing cellulose to nitric acid, according to chemical texts.

Searfoss said the flammable chemical was removed and other chemicals in damaged or leaking containers were placed in larger containment vessels for safe removal. Searfoss also ordered the closure of Washington Street between North Second and Front streets to auto and pedestrian traffic.

“If you stand close to that basement window where the fire started you might experience an irritating smell,” Searfoss said Wednesday night at the scene. “We’re removing the chemicals and blocking the streets and sidewalks all out of an abundance of caution.”

Searfoss said the Cospro building will remain closed until testing of the various chemicals, as well as on the unknown compounds created when the various leaking chemicals mixed, is completed. Testing could take several days.