This was like the NCAA basketball tournament on steroids as 105 collegiate teams had to build simulated energy infrastructure and defend it from cyberattacks.

After a long suspenseful day, the school that earned the top spot was University of Maryland, Baltimore County as they were the national winner of the U.S. Department of Energy’s (DoE) fifth CyberForce Competition.

“CyberForce brings teams together to protect against tomorrow’s threats, a uniquely American approach to problem solving,” said Energy Secretary Rick Perry. “Congratulations to this year’s winners and a big thanks to all the bright students who participated.”

The competition, which aims to inspire and develop the next generation of energy sector cybersecurity professionals, is co-funded by the DoE’s Office of Cybersecurity, Energy Security, and Emergency Response (CESER); Office of Electricity; Office of Science; Office of the Chief Information Officer; Office of Energy Efficiency & Renewable Energy; and the National Nuclear Security Administration.

The 2019 event challenged teams to defend one of four realistic system scenarios — an energy company’s solar generation facility, electric substation, high performance computing center, or manufacturing plant — while communicating with the other three infrastructures to monitor and maintain the integrity of the system as a whole. Each team was scored on its ability to safeguard against attacks while ensuring the system’s usability.

“Every year, the CyberForce Competition attracts more and more talented students,” said Karen S. Evans, Assistant Secretary for DoE CESER, “and with the expansion to address professional recruitment, the competition will only continue to grow. We envision this competition to be a tool to assist our sector to close skills gaps and shortage of cybersecurity experts.” 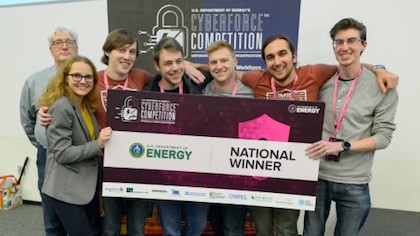 The team from University of Maryland, Baltimore County won the national DoE CyberForce Competition over the weekend, besting more than 100 teams from 10 national laboratories across the country.
Source: Argonne National Laboratory

This year, DoE also hosted a CyberForce Competition Professional Pilot at Argonne National Laboratory to coincide with the collegiate competition, in which a team of experienced cyber defenders tested their cyber prowess in a similar cyber-defense simulation.

“It was inspiring to watch these teams designing, building, and defending their cyber systems against attacks based on real-world scenarios,” said Argonne Director Paul Kearns. “Their enthusiasm was contagious, and it bodes well for our future ability to safeguard critical infrastructure.”