Logan Carpenter teases his co-workers when they complain about work.

Growing up in rural Madison County, Virginia, he worked on a chicken farm through high school and took up landscaping and painting jobs on the side. After tending to poultry, performing menial labor for low wages, and being consumed daily by bugs and southern humidity, Carpenter decided there had to be a better way, so that is when he decided college was for him.

The link from one job to the other was a pipeline program that connects students at historically black colleges and universities with cybersecurity internships at Sandia and Lawrence Livermore national laboratories.

“There were not any other programs like this, and we spent quite a lot of time meeting with minority-serving institutions and learning what worked well and what did not,” said Dimitri Kusnezov, deputy undersecretary for artificial intelligence and technology at the Department of Energy, who led the effort to form the Consortium Enabling Cybersecurity Opportunities & Research (CECOR).

CECOR Starts
Created in 2015, the consortium enabled Carpenter and others at participating institutions to come to Sandia for summer internships, gain work experience and cultivate interests and skills.

“CECOR is a great way for Sandia to bring these stellar and talented students from underrepresented, minority populations to the labs to create a workforce that approaches challenges with diverse perspectives,” said Han Lin, the program’s manager at Sandia. 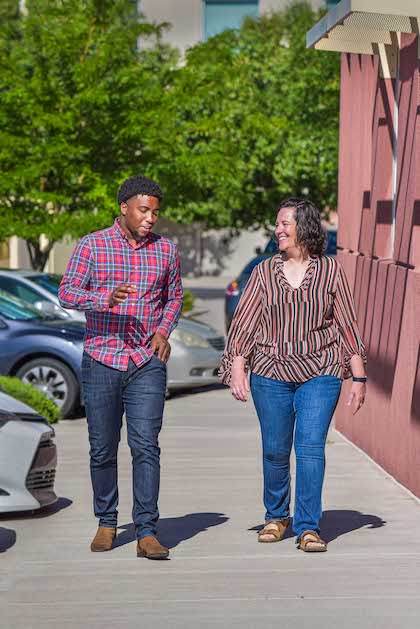 “Interns enter a job market rich with opportunities,” said David Martinez, Sandia’s recruiting manager. “About 300,000 unfilled cybersecurity jobs exist in the U.S., and there are approximately 2 million opportunities throughout the world.”

Some interns find their best option is at Sandia, including Carpenter.

“Looking over everything I’ve done,” Carpenter said, “the most pivotal part of my career was CECOR.”

When Carpenter came to Sandia as a computer science major from Norfolk State University in coastal Virginia, one of the first people he met was program coordinator Tommie Kuykendall, who told him to drink lots of water and wear sunscreen.

Good Advice
Every CECOR intern at Sandia gets to know Kuykendall. She’s on the selection committee when they apply and becomes their primary contact once they arrive. Like many New Mexico natives, she bubbles with advice about living in the Southwest. “A lot of these students have never been away from home, or at least not this far from home,” Kuykendall said. “So, I try to be there if they need me. I do give them a little advice when they first get here.”

Behind the scenes, she’s a traffic controller at the intersection of students, labs and universities. She networks with professors and swaps information with her counterparts at Lawrence Livermore National Laboratory. At Sandia, she connects students with the right people and projects for their interests.

“I’ve always felt that reaching back into communities is important because that’s going to get kids real experience,” Kuykendall said.

“Being that most of the projects are team-oriented, you get the opportunity to learn from other interns and really experience how it is to work with others to solve problems,” Carpenter said.

Over his summer internship, Carpenter helped update a cybersecurity training simulation designed at Sandia called TracerFIRE (Forensic Incident Response Exercise). One of his jobs was to hack into their simulated network to identify weaknesses. He also built equipment that linked with the network to act as a kind of visual score board, automatically adding water to containers when users completed tasks.

Within a few weeks, Kuykendall was impressed. Carpenter had a habit of strolling down the halls of his building when he had a question, knocking on doors until he found someone with the answer. His personality, she thought, would thrive at Sandia, and she started introducing him to managers. “We need people who are willing to take a chance,” Kuykendall said.

Demand for cybersecurity specialists has grown rapidly at Sandia, in part because computer networks are becoming closely tied into physical security and public safety, Carpenter said.

Protecting ICS
For example, industrial control systems are devices used to monitor and regulate equipment. If a boiler in a factory gets dangerously hot, an industrial control system recognizes that and shuts it down automatically. Control systems also facilitate communication between airports and airplanes, and regulate electricity flowing to hospitals and emergency services. Security in these systems is paramount because, while facilities might have backup systems, failure could have immediate, potentially life-threatening consequences.

Increasingly, these systems are being connected to the Internet. But securing them against web-based threats is challenging because their software is often custom-designed for niche tasks, rather than mass-produced. Custom controls require custom testing, which can take up to a year to develop and execute.

Carpenter and his research team are studying whether they can design a universal platform to emulate virtually any control system with a desktop computer, which could shave months off finding and patching vulnerabilities.

To help address pressing national security demands, Sandia formed a task force in 2018 that ensures every cybersecurity or computer science resume it receives that meets minimum requirements is reviewed by Sandia professionals. As a team, the task force circulates resumes among hiring managers to find jobs for as many qualified applicants as possible.

CECOR was created as one piece of a DoE initiative to create educational opportunities in technical areas for minority youths, Kusnezov said.

“The cyber program was one of the important legs of this effort that aligned with the administration’s priorities in cyber and DoE’s needs,” he said.