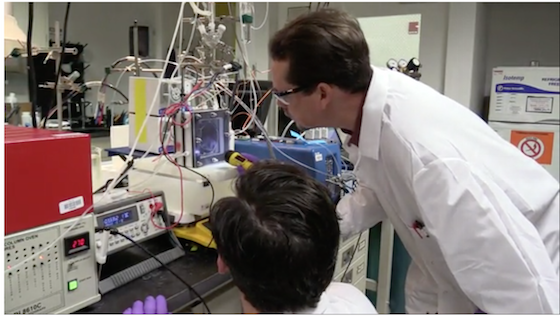 Oak Ridge National Laboratory researchers have discovered a new type of catalytic reaction that could lead to more energy efficient and environmentally friendly method of ammonia production for fertilizer.

The search for a more energy efficient and environmentally friendly method of ammonia production for fertilizer has led to a new type of catalytic reaction.

Using nanoscale spikes of carbon to catalyze a reaction that generates ammonia from nitrogen and water, aided by lithium salt and the application of an electric field, there is potential for a type of catalyst that has been theoretically suggested but never demonstrated, said researchers at the Department of Energy’s Oak Ridge National Laboratory (ORNL).

“It’s a catalyst that operates completely based on the electric field; this has never been observed for nitrogen,” said ORNL’s Adam Rondinone, the study’s lead author. “We call it a physical catalyst — normally a catalyst is chemical.”

Ammonia, a compound made of one nitrogen atom and three hydrogen atoms, is typically produced through the energy-intensive Haber-Bosch approach. This process uses high temperature and pressure to split the stable bonds of molecular nitrogen, requiring large amounts of natural gas. Industrial production of ammonia consumes an estimated three percent of the world’s energy and generates three to five percent of the world’s greenhouse gas emissions.

“Ammonia production is a huge problem that we need to find ways to address,” Rondinone said. “In pursuit of this goal, we’ve discovered a reaction mechanism that gives us a new pathway.”

Unlike Haber-Bosch, the team’s process occurs at room temperature in a solution of water, dissolved nitrogen gas and lithium perchlorate salt, with the help of a unique catalyst in the form of nanoscale carbon spikes. These spikes, only 50-80 nanometers in length and one nanometer wide at the tip, act as hot spots to amplify the electric field and attract positively charged lithium ions. The lithium is hypothesized to drag along nitrogen molecules, which concentrate around the electrified carbon spikes and begin reacting to form ammonia.

“Every normal catalyst operates by forming a chemical bond between the reactive molecule and the catalyst surface. In this case, there’s no chemical bond necessary. It’s simply the high electric field that allows the reaction to proceed,” Rondinone said.

The reaction’s low yield – about 12 percent – limits its viability for industrial use, but the discovery of its unique electrochemistry may help develop alternative approaches to ammonia generation.

The researchers also used computational modeling and simulation to understand their experimental results. They calculated theoretical predictions of the electric field, the enrichment of ions around the carbon spikes and the molecular orbital energies of nitrogen to describe how the molecules destabilized in the electric field.

“Due to the sharp nanospike tips, the local electric field is indeed very strong, on the order of 10 volts per nanometer,” said ORNL theoretician Jingsong Huang. “We performed calculations to study the ionization potential and electron affinity of nitrogen under applied electric fields, and those calculations suggest that otherwise inert nitrogen becomes reactive.”