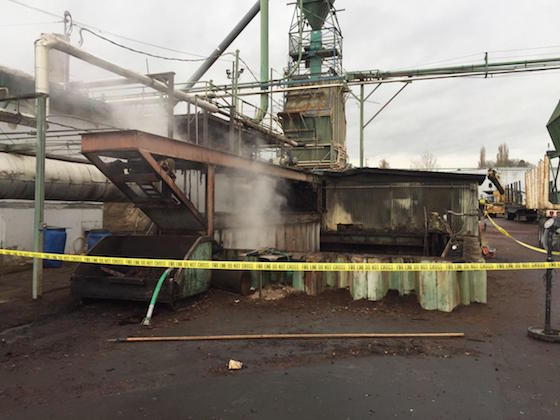 Francis “Frankie” Crispen Jr., an apprentice electrician, died after he fell into a vat at Columbia Forest Products.

An apprentice electrician died following an accident at Columbia Forest Products in Klamath Falls, OR, was working on repairs alone at the time of his death, investigation documents show.

Francis “Frankie” Crispen Jr., 28, died Nov. 17 after he fell into an improperly protected vat, containing a hot sodium hydroxide water mixture, while trying to repair a damaged cord on a conveyor motor system.

Oregon’s Occupational Safety and Health Administration fined Columbia Forest Products $17,500, citing three “serious” violations for not providing safer access to the area in question. Field notes in OSHA’s report state the vat cover Crispen fell through was not designed to provide fall protection nor function as a walking/working surface.

Calls to Columbia Forest Products in Klamath Falls for further comment were not immediately returned.

Crispen was the 68th person involved in an Oregon work-related fatality in 2017, which had 80 deaths through December, according to OSHA preliminary reports.

The Herald and News in Klamath Falls obtained a 235-page report Tuesday, which details several events, testimonials and summaries of Crispen’s death in the OSHA investigation.

Crispen first answered a call to the boiler house at 8:30 p.m. on Nov. 17 in response to a waste conveyor motor that kicked out. The motor was above the vat Crispen fell into.

Crispen likely climbed over an existing but damaged guard rail, described as two posts “lying flat down” and a chain, and went upward along the area in an attempt to repair the damaged motor, according to reports.

Several local law enforcement and rescue crews first responded at 11 p.m. that night. Crispen’s body was not recovered until about 7 a.m. the next morning.

The investigation notes a lack of fall protection use while working around or above vat tanks, noting that Columbia Forest Products supervisors were “cooperative,” providing documentation of training, safety meetings, work orders, employee contacts and other interviews. All electrical equipment was locked out adequately and there were no indicators of electric shock.

Records also show all interviewed supervisors believed Crispen was capable of working alone, though one remarked that they prefer to have electricians “work in pairs.”

In the days that followed, several of Crispen’s supervisors and colleagues were interviewed, in addition to OSHA officials closely inspecting the condition of the broken vat cover.

OSHA documents say the employer reported the incident in a timely manner and that a phone conversation was held shortly after. Two senior safety compliance officers from Medford traveled to the site to survey and take photos of the area following the incident.

Each violation mentioned in the report states the employer did not ensure there were proper protections to prevent injury or death from falls.

The vat cover had a 2-foot by 6-foot steel frame and wood exterior with thin plastic material that could not withstand high amounts of pressure. OSHA’s reports also note the cover was in “poor condition with existing damage and holes” throughout.

Several employees who walk by or have worked near the vat have said they were aware that the cover was not designed to be worked on or walked on. There was, however, no documentation or signage to warn that it was potentially unsafe.

The report also shows Columbia Forest Products has since installed improved guard railings around the vat.
=