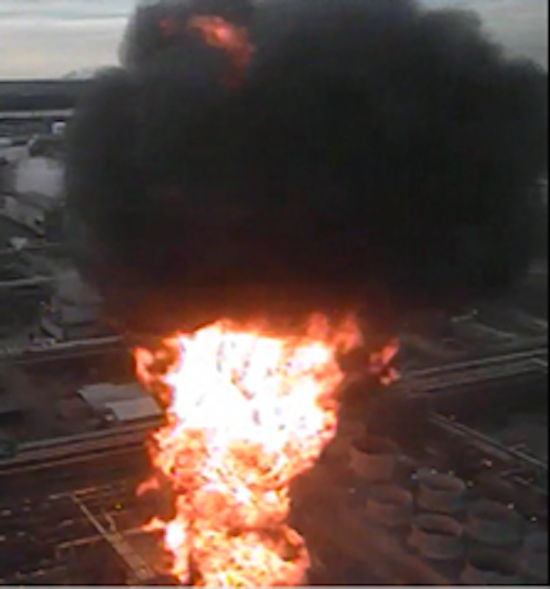 A final report released on the November 22 fire that severely burned four workers at the ExxonMobil refinery in Baton Rouge, Louisiana.

The fire occurred during maintenance activities when operators inadvertently removed bolts that secured a piece of pressure-containing equipment to a plug valve. When the operators attempted to open the plug valve, the valve came apart and released flammable hydrocarbons, which formed a vapor cloud that quickly ignited, said investigators at the Chemical Safety Board (CSB).

Earlier this summer, the CSB released a detailed animation showing the events that led to the 2016 fire.

A key safety lesson discussed in the bulletin is the “hierarchy of controls.”

This is a method of evaluating safeguards to provide effective risk reduction. Within the hierarchy of controls, an engineering control, such as improved valve design, is more effective than a lower level administrative control, such as a sign warning workers that the gearbox support bracket connects to pressure-containing components.

The CSB report concluded updating all the older valves to the safer valve design, as was done to approximately 97 percent of the valves in the unit, would have ultimately prevented the incident

“Our investigation also revealed a culture at the refinery that was accepting of operators performing maintenance on malfunctioning plug valve gearboxes without written procedures or adequate training, which in this instance, resulted in a hazardous event,” said CSB Investigator Mark Wingard.

The CSB is issued key lessons to address the shortcomings:
1. Evaluate human factors — interactions among humans and other elements of a system — associated with operational difficulties that exist at a facility in relation to machinery and other equipment, especially when the equipment is part of a process covered by the Occupational Safety and Health Administration’s Process Safety Management (PSM) standard. Apply the hierarchy of controls to mitigate the identified hazards.
2. Establish detailed and accurate procedures for workers performing potentially hazardous work, including job tasks such as removing an inoperable gearbox.
3. Provide training to ensure workers can perform all anticipated job tasks safely. This training should include a focus on processes and equipment to improve hazard awareness and help prevent chemical incidents.