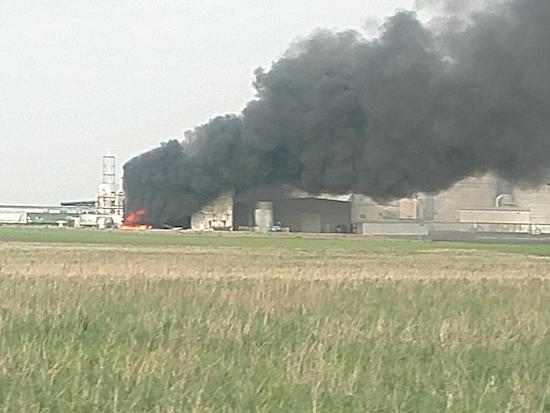 One of the buildings at Jacam Chemical burns after a fire broke out last Tuesday in Rice County, KS. The rest of the facility returned to work Monday.
Photo by Scott Crain

A chemical plant reopened Monday after a fire destroyed one of its buildings last Thursday.

No one was hurt in the fire at Jacam Chemicals in Sterling, KS, in Rice County. It is still unclear what caused the fire. The company plans to rebuild the building that burned.

Evacuated residents are back home and surrounding roads reopened following the Thursday morning fire at the Jacam Chemicals plant, according to Rice County Emergency Management officials.

Some crews remained on the scene into Friday to monitor hot spots and make sure the situation stays under control, said Rice County Emergency Management Director Greg Klein.

There is no reported danger to air quality and the Kansas Department of Health and Environment is at the site, Klein said. He added the state fire marshal will be in Rice County Friday, working to determine what caused the fire.

When firefighters first arrived on scene and flames covered much of the building, they were not able to get inside.

Witnesses said when the fire first broke out, they could hear the occasional popping of exploding barrels of chemicals, followed by flames shooting into the air.

Firefighters said they concentrated on making sure the fire did not spread to any of the 17 other buildings at the plant. While they said the chemicals burning are not toxic, they didn’t want to take any chances, so they shut down roads in the area and asked residents to evacuate. This included most of the workers at the ethanol plant near Jacam.

Klein said they will continue to monitor air quality from the plant to the city of Lyons. The fire is not affecting air quality within Lyons or areas north of the plant, he said.

Laura Snyder, the corporate communications manager for Jacam, said there are 18 buildings on the property.

Snyder says the chemicals inside the building are flammable, but there are no inhalation hazards, so the decision has been made to let the fire burn.

Snyder said a list of the chemicals involved was not forthcoming, but firefighters had been apprised of their nature, and that no inhalation hazard existed. Jacam offers a broad selection of fracturing chemicals, according to its web site. Jacam manufactures, designs, and distributes a line of specialized chemicals for the oil and gas industry.

All employees evacuated and no one suffered an injury.

Snyder said the company remains committed to safety and there will be a thorough investigation once the fire is out.