It wasn’t that long ago when an explosion and subsequent fire broke out in the Fluid Catalytic Cracking Unit (FCCU) at the Superior Refinery Company LLC refinery in Superior, Wisconsin, leaving 36 people injured and a portion of the city of Superior was forced to evacuate.

The ensuing fire after the explosion that occurred April 26, 2018, could have been worse, had it not been for a relationship between the refinery and the local fire department.

As a new video from the Chemical Safety Board (CSB) shows firefighting teams understood what was occurring during the incident and they were able to quickly come up with a plan to cut down a fire that would normally burn for days to a couple of hours.

The video showed a piece of debris from the explosion flew about 200 feet, and struck a large, nearby, above ground storage tank containing about 50,000 barrels of asphalt. The side of the tank was punctured, resulting in the release of over 15,000 barrels of hot asphalt into the refinery. As it always does when a chemical starts to leak, the asphalt found an ignition source and started the fire.

As a result of the incident, Husky’s internal investigation remains largely consistent with the findings of the CSB, which concluded the initial explosion was caused by a failed slide valve that allowed a flammable mixture to form inside the facility’s catalytic cracking unit.

One of the positive aspects from the blast and ensuing fire was the incident occurred during a scheduled break time and workers previously in the unit before the explosion had moved either into blast resistant buildings or away from the process unit.

Over a year and a half after the incident, though, Husky Energy said it is ready to go in its move to rebuild its refinery. 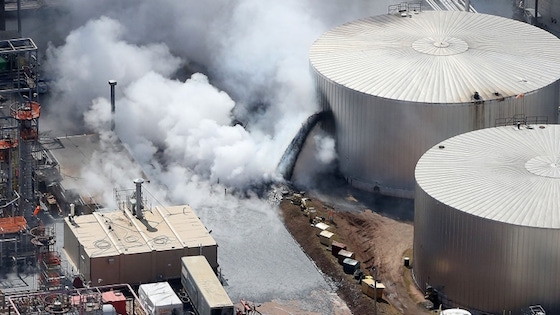 A black liquid pours from a ruptured tank following the explosion at a Husky Energy oil refinery in Superior, WI, in April 2018.

As the first refinery along the route of the Enbridge Mainline, Superior is integral to Husky’s upstream/downstream business corridor, which processes Canadian heavy crude into products such as gasoline, diesel and asphalt for the U.S. Midwest market, the company said.

The rebuilt refinery will be “modernized,” with advances in technology and efficiency, Husky said. New equipment will also increase heavy oil processing capacity by approximately 5,000 bbls/d to 25,000 bbls/d on average.