Imagine a magnitude 7.0 earthquake during a football game causes portions of the stadium to crumble. Chaos ensues as thousands of people rush to nearby exits or fall victim to crashing debris.

Within minutes, amidst the chaos, Emergency Medical Services (EMS), firefighters and law enforcement respond – searching and rescuing victims underneath the rubble, triaging patients, putting out fires and tending to a HazMat gas leak from an overturned trailer truck just outside the venue. Now imagine if this hypothetical situation really happened.

Would all the responder agencies be ready? Would they have the tools they need? These are the types of scenarios and questions the Department of Homeland Security (DHS) Science and Technology Directorate (S&T) hoped to reconcile for first responders during a recent operational exercise in Birmingham, Alabama.

The DHS S&T’s Next Generation First Responder Program partnered with public safety agencies from the City of Birmingham and Jefferson County, Alabama, for the NGFR – Birmingham Shaken Fury Operational Experimentation (OpEx). The OpEx assessed first responder technology that addressed the city’s public safety agencies’ capability gaps to help augment their capabilities for the World Games 2021 and unexpected natural disasters. S&T also partnered with industry to provide vendors the opportunity to receive operational feedback about their technology from first responders.

The overall scenario for the OpEx was affiliated with the Federal Emergency Management Agency’s Shaken Fury 2019 exercise. It was designed to test communications, situational awareness systems and networks; simulate coordinated responses during structural damage and life-threatening mass casualty incidents; and coordinate responses to a HazMat incident caused by the earthquake.

The NGFR-Birmingham Shaken Fury OpEx is a culmination of integration demonstrations that began as table top exercises in 2016. 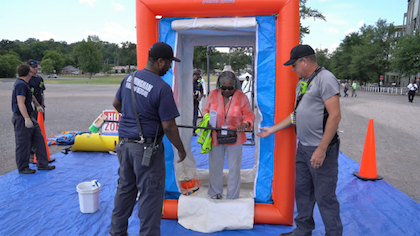 Birmingham, AL, first responders get to work with next generation technology in preparation for “the next big one.”

“We started our experiments in an in-house lab and developed technology that would eventually integrate in an open architecture using open standards,” said S&T NGFR OpEx Director, Cuong Luu. “Today, we see how our in-house lab experiments have progressed to tangible technologies that first responders are holding in their hands and actually using in an operational environment.”

“Because this looks like an exercise, it gives first responders the opportunity to work together across disciplines to collaborate and create a cogent plan that will see them through an actual event,” said Jim St. John, an emergency management officer for the Jefferson County Alabama Emergency Management Agency.

Technology Assigned
Prior to running the two-day experiment, first responders were assigned technology, and vendors from industry – along with S&T staff – instructed each responder on the use of their devices. Technology included body-worn cameras, arm-worn wearable devices that provided body metric monitoring and accountability, and sensors that identified HazMat materials. For search and rescue, unmanned aircraft systems were used to identify victims trapped underneath rubble. For the unified command element, new situational awareness platforms and tools identified first responders on the field.

“The platforms S&T and the industry vendors have provided us here today help us to better understand the tech that is available for us to make us more situationally aware,” said Moon.

“I can’t begin to tell you how important it is that we know where our responders are when they’re responding to an emergency. With the World Games coming to the city, and anticipating those huge crowds, situational platforms and sensors will help us to direct responders to citizens who need us and ultimately, keep our guys safe.”

World Games Prep
The World Games, a major multi-sport event held every four years in the year that follows each Olympic Summer Game, hosts nearly 3,600 athletes from around the world in 33 multi-disciplinary sports. Birmingham has been in preparations for the huge 11-day event since the city was selected to host the games in 2015.

For Don Lupo, operations manager for the City of Birmingham, the upcoming games, which will bring an influx of 250,000 people, will not only be an opportunity to showcase the city’s hospitality and charm, but will also spotlight the city’s safety measures.

“I get excited about this stuff,” said Lupo. “It gives us the chance to not only do good work, but with all of the tech that DHS S&T and industry have provided us, the OpEx gives us that much more knowledge and that gives us the opportunity to do a better job for the people we serve.”

Lupo said the biggest lesson learned from the OpEx is in an ever-changing world, public safety agencies must think about how the next generation technology they acquire must ultimately serve their responders in an efficient way.

“It doesn’t matter how many pieces of technology we’ve got to play with, there’s always something out there that’s better,” said Lupo. “We need to learn how we can get all this new tech to work together for our response efforts.”