Just the mere mention of the work fracking brings many discussions regarding environmental concerns, legislation, a boom in natural gas and now radioactive materials.

That is why the Department of Energy (DOE) and General Electric (GE) will spend $2 million over the next two years to remove naturally occurring radioactive materials from the fracking fluids produced by the shale-gas industry.

The New York State Department of Health has identified Radium-226 as a radionuclide of particular concern in the Marcellus Shale formation deep beneath the Appalachian Mountains.

In hydraulic fracturing operations, drillers force water and a mixture of chemicals into wells to shatter the shale and free natural gas.

The brine that returns to the surface can contain up to 16,000 picoCuries per liter of Radium-226, research shows. The discharge limit in effluent for Radium 226 is 60 pCi/L, and the EPA’s drinking water standard is 5 pCi/L.

Uranium and Radon-222 are also in water returning to the surface from deep shale wells.

In Pennsylvania, produced water has discharged into streams and rivers from the state’s 71,000 wells after conventional wastewater treatment but without radiation testing, according to the Pittsburgh Post-Gazette and The New York Times, which drew attention to the radioactive contamination earlier this year after studying internal EPA documents.

The documents reveal the wastewater, which companies sometimes haul to sewage plants not designed to treat it and then discharge it into rivers that supply drinking water, contains radioactivity at levels higher than previously known, and higher than the level that federal regulators say is safe for these treatment plants to handle.

The process will produce concentrated radioactive waste, which they will be able to dispose of through conventional means, which usually means storage in sealed containers for deep geological disposal.

The government is seeking to address environmental concerns without stemming a boom in cheap gas unleashed by hydraulic fracturing, or fracking, in shale formations. 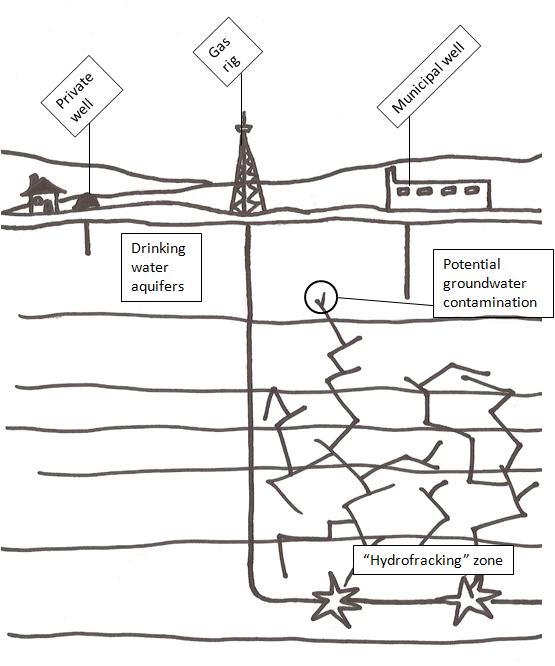 Diagram of the fracking procedure.