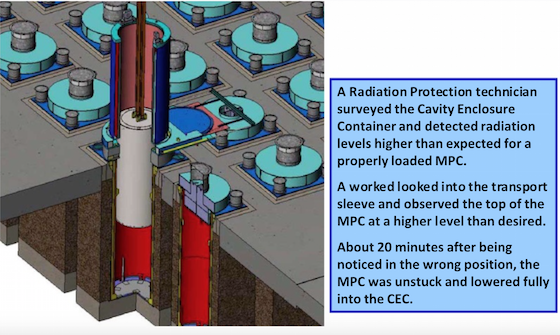 The San Clemente, CA, plant is owned by Southern California Edison and permanently shut down in 2013.

Fuel loading operations ended up suspended following an Aug. 3, 2018, incident involving a loaded spent fuel storage canister that was misaligned and became stuck on a flange while being lowered into a storage vault.

The NRC made its determination following extensive review of technical data submitted by Edison regarding the possible effects of scratching on spent fuel canisters during fuel loading operations.

This past summer’s fuel-loading incident did lead to a civil penalty from the NRC, which issued a final enforcement decision to Southern California Edison, imposing a $116,000 civil penalty for two violations of federal requirements.

Both violations relate to Edison’s handling of an Aug. 3 incident after a stainless steel Holtec canister containing 50 tons of spent nuclear fuel rods got stuck on a shield ring as it was lowered into its concrete housing.