A chemical fire at the Vanscoy Nutrien Potash mine site is out, but regular operations have been discontinued for now, officials said.

At the time of the Saturday night fire, Vanscoy was operating at half capacity, said Nutrien spokesman Will Tigley. “We’re still assessing the impact this will have on our production, but expect it to be minimal.”

The building was “totally engulfed in flames” when firefighters arrived, said Fire chief Mike Given with the Delisle and District Fire Commission in Saskatoon, Canada. “Our protocol for any kind of chemical fire is to not use water. The understanding is that you want that fire to burn as hot and as fast as possible, so that was our stance — to protect exposures and to let it burn.”

In the HazMat incident, the fire department said an incident action plan “determined that two engines with master stream capability would be a starting point for gaining control of the fire and protecting nearby structures.” Two engines were added to the dispatch shortly after midnight and remained at the scene until the operation scaled back. Saskatoon crews were released from the scene around 5 a.m. but the incident was still ongoing at 6:15 a.m.

No one was injured in the fire.

“I can confirm that thankfully, there were no injuries and all of our employees are safe and accounted for,” Tigley said Sunday. “With that, we appreciate the response by the fire crews from the City of Saskatoon, as well as volunteer services from Pike Like, Delisle, and the rural municipality of Montrose.”

“I’ve been on the department for going on 14 years, and that’s the first for me … the first (chemical fire) of that scope,” Given said. “It was quite large.” 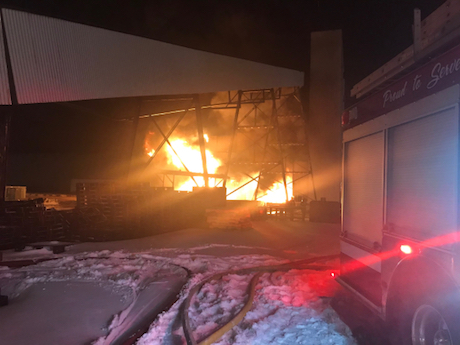 The amount of damage and the type of material involved in the fire was not known. Tigley said there is no concern for any employees or anyone in the nearby community.
The fire remains under investigation.

In January, the company said it would resume potash production at its Vanscoy mine.