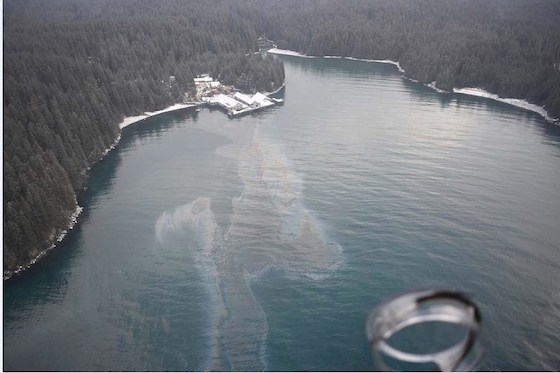 An aerial view of the oil spill on Shuyak Island.
Photo by Alaska Department of Environmental Conservation

High winds knocked over up to 3,000 gallons of fuel off a dock roughly 50 miles north of the City of Kodiak in Alaska on Monday.

Gusts of over 80 mph Monday toppled a fuel bladder at Port Williams on Shuyak Island, according to a situation report from the Alaska Department of Environmental Conservation.

The United States Coast Guard has contracted with Anchorage-based Alaska Chadux for cleanup.

The Chadux crew is on standby in the City of Kodiak because of the wind, said Matthew Melton, the company’s general manager.

“There’s a lot of people that are ready to rock and roll. We’re just waiting for the weather to lay down so we can get out there and be able to work safety.”

According to the DEC report, they suspect the bladder released all of its fuel into the water, but Melton said they still need to check out the scene.

In the case of a fuel spill, they use an oil containment boom to gather the fuel and prevent it from leaving the bay.

Shuyak is the site of Port Williams Seaplane Base, which is under the ownership of Ocean Beauty Seafoods, and the area is labeled as critical habitat for sea otters and Steller sea lions.