An explosion at a well pad in 2018 in Belmont County in eastern Ohio led to 20 days of a raging fire on top of a release of 60,000 tons of methane.

The amount of methane released ended up confirmed from a European Space Agency satellite able to detect and measure the emissions. The 60,000 tons of released methane was more than some countries emit in a year.

For 20 days after workers lost control of a horizontal gas well in Belmont County, a fire kept burning. In addition, harmful methane emissions released into the air around the eastern Ohio community.

State records also show during the February 2018 incident, fluid from the ExxonMobil-owned Schnegg well entered a tributary of Captina Creek. At the same time, residents as far as a mile away ended up evacuated.

It was unknown how much natural gas released.

However, a team of Dutch and American scientists was able to detect the blowout using an orbiting satellite to measure methane.

That’s more methane than some countries release in a year.

“In fact, annual oil and gas emissions from only three of the European Union’s 15 countries, plus Switzerland and Norway, are estimated to be higher than that of the blowout,” said Steven Hamburg, a chief scientist at the Environmental Defense Fund.

Hamburg was one of several scientists who published the findings in the Proceedings of the National Academy of Sciences. 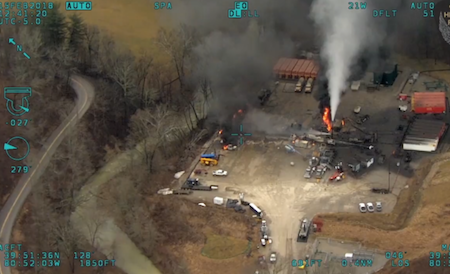 The emissions in Belmont County were twice the peak emission rate of the Aliso Canyon event in California in 2015 — one of the worst natural gas leaks in the country.

Methane is often described as a greenhouse gas and is considered a significant contributor to climate change. When there’s a leak, it absorbs the sun’s heat 80 times more readily than carbon dioxide and contributes to warming the atmosphere. Ohio’s temperatures, which are already warming, are expected to continue to rise by 4 to 6 degrees by mid-century if emissions aren’t lowered.

“We very much regret the incident occurred and have instituted systematic well design and monitoring procedures to prevent it from happening again,” said Julie King, a spokeswoman for ExxonMobil.

The instrument that detected the leak, the TROPOspheric Monitoring Instrument, launched by the European Space Agency, is outfitted with a spectrometer.

“So it’s looking at the wavelengths, very specific wavelengths, of reflective light off the surface of the Earth. It gives you a signal of the methane in the air between the satellite and the ground,” Hamburg said. “You can then look at how that varies over geography so you can calculate where there is an enhancement — where the level is higher.”

Once that pattern is discovered, scientists can use what’s called an inversion “to take that pattern of concentrations, and calculate, basically run the movie in reverse. What was the source point? And how much? That allows you to quantify,” he said.

The technology shows the potential to track and hold companies, regulatory agencies and governments responsible for reducing methane emissions from oil and gas operations that are invisible to the naked eye.