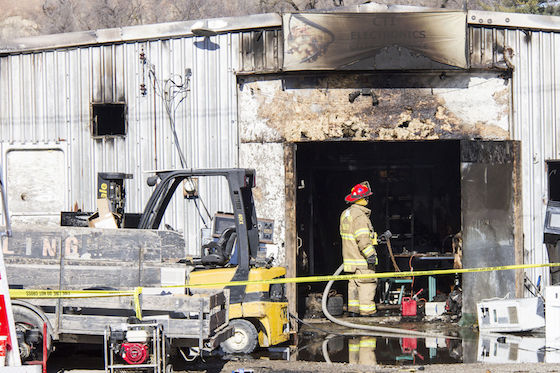 CTI Electronics, a Missouri Valley, IA, electronics recycler, was heavily damaged after it caught fire on Nov. 23. Two people were found dead inside.

The cause of a fatal Thanksgiving Day fire inside CTI Electronics in Missouri Valley, IA, officially remains a mystery, but the possible cause ended up listed as flammable vapors from an aerosol can that became airborne and ignited on an open flame, most likely a candle.

In the morning hours on Nov. 23, a fire started inside CTI Electronics at 204 E. Erie St. After firefighters put out the blaze, the bodies of Stacy Ann Larsen, 44, and Chad Stevens, 44 were found inside the remains of the building.

Their cause of death was reported as smoke inhalation and thermal injuries according to the Iowa State Medical Examiner’s Office. The manner of death has been ruled as accidental.

The business was an electronics recycling and repair shop.

In a statement, the State Fire Marshal’s Office said the extent of the damage within the area where the fire started, combined with the lack of witnesses to the event, led to the official cause being undetermined.

The fire began inside an old office area being used as a bedroom by Stevens, who worked security at the building.

Though the fire has been classified as undetermined, a possible cause was listed as flammable vapors from an aerosol can that became airborne and ignited on an open flame, most likely from a candle.

The report also stated there were no working smoke detectors inside the building. A closed circuit surveillance system was in the building but was destroyed in the fire.

No evidence of foul play was found in either the cause of the fire or deaths. The investigation is now closed.