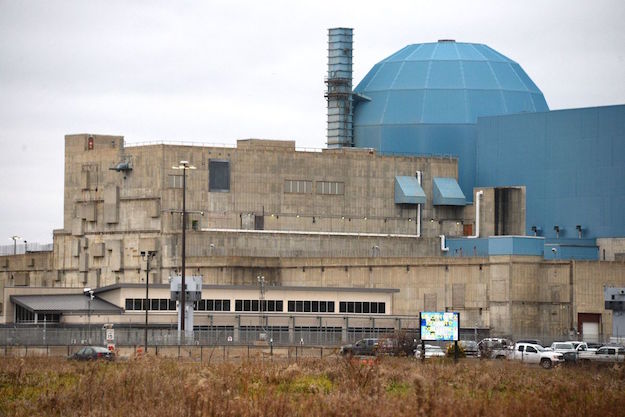 At the Clinton Power Station, the Old Adage Lives On: Fool Me Once, Shame on You, Fool Me Twice …

EDITOR’S NOTE: This is part of a series of stories that will appear on ISSSource that focus on near misses at nuclear plants. This originally appeared on the Union of Concerned Scientists web site.

By Dave Lochbaum
The Clinton Power Station located 23 miles southeast of Bloomington, Illinois has one General Electric boiling water reactor with a Mark III containment that began operating in 1987.

On December 8, 2013, an electrical fault on a power transformer stopped the flow of electricity to some equipment with the reactor operating near full power. The de-energized equipment caused conditions within the plant to degrade. A few minutes later, the control room operators manually scrammed the reactor per procedures in response to the deteriorating conditions. The NRC dispatched a special inspection team to investigate the cause and its corrective actions.

On December 9, 2017, an electrical fault on a power transformer stopped the flow of electricity to some equipment with the reactor operating near full power. The de-energized equipment caused conditions within the plant to degrade. A few minutes later, the control room operators manually scrammed the reactor per procedures in response to the deteriorating conditions. The NRC dispatched a special inspection team to investigate the cause and its corrective actions. The NRC’s special inspection team issued its report on January 29, 2018.

Coincidence? Nope. When one does nothing to solve a problem, one invites the problem back. And problems accept the invitations too often.

Setting the Scene
The Clinton reactor was operating near full power on December 8, 2013, and on December 9, 2017. The electricity produced by the main generator (red circle labeled MAIN GEN in Figure 1) at 22 kilovolts (KV) flowed through the main transformers that upped the voltage to 345 KV (345,000 volts) for the transmission lines emanating from the switchyard to carry to residential and industrial customers. Some of the electricity also flowed through the Unit Auxiliary Transformers 1A and 1B that reduced the voltage to 6.9 and 4.16 KV (4,160 volts) for use by plant equipment.

The three buses also provided power to transformers that reduced the voltage down to 480 volts for distribution via the 480-volt buses. For example, 4,160-volt bus 1A1 supplied 480-volt buses A and 1A.

Struck Again
On December 8, 2013, and again on December 9, 2017, an electrical fault on one of the 480-volt auxiliary transformers caused the supply breaker (shown in purple in Figure 2) from 4,160-volt bus 1A1 to open per design. This breaker is normally manually opened and closed by workers to control in-plant power distribution. But this breaker will automatically open to prevent an electrical transient from rippling through the lines to corrupt other equipment.

The loss of 480-volt buses A and 1A interrupted the flow of electricity to emergency equipment but did not affect power to non-safety equipment. Consequently, the reactor continued operating near full power.

The emergency equipment powered from 480-volt buses A and 1A included the containment isolation valve on the pipe supplying compressed air to equipment inside the containment building. This valve is designed to fail-safe in the closed position; thus, in response to the loss of power, it closed.

Among the equipment inside containment needing compressed air were the hydraulic control units for the control rod drive system.
Source: Nuclear Regulatory Commission

Ten minutes after the electrical breaker opened on December 8, 2013, an alarm in the control room sounded to alert the operators about low pressure in the compressed air system. The operators followed procedures and responded to the alarm by manually scramming the reactor.

Four minutes after the electrical breaker opened on December 9, 2017, an alarm in the control room sounded to alert the operators about low pressure in the compressed air system. Two minutes later, other alarms sounded to inform the operators that some of the control rods were moving into the reactor core. They manually scrammed the reactor. (The timing difference between the two events is explained by the amounts of air leaking from piping inside containment and by the operation of pneumatically controlled components inside containment that depleted air from the isolated piping.)

The event had additional complications. The loss of power disabled: (1) the low pressure core spray system, (2) one of the two residual heat removal trains, the reactor core isolation cooling system, and the normal ventilation system for the fuel handling building (the structure on the left side of Figure 3). These losses were to be expected – subdividing the emergency equipment into three divisions and then losing all the power to that division de-energizes about one-third of the emergency equipment.

Fortunately, the loss of some emergency equipment in this case was tolerable because there was no emergency for the equipment to mitigate. The operators used non-safety equipment powered from the offsite grid and some of the emergency equipment from Divisions 2 and 3 to safely shut down the reactor. The operators anticipated the loss of compressed air to equipment inside containment would eventually cause the main steam isolation valves to close, taking away the normal means of removing decay heat from the reactor core. The operators opened other valves before the main steam isolation valves close to provide an alternate means of sustaining this heat removal path. About 30 hours after the event began, the operators placed the reactor into a cold shut down mode, within the time frame established by the plant’s safety studies.

Repeat Performance
Workers replaced the failed Division 1 transformer following the December 2013 event. Clinton has five safety-related and 24 non-safety-related 4,160-volt to 480-volt transformers, including the one that failed in 2013. Following the 2013 failure, a plan was developed to install windows in the transformer cabinets to allow the temperature of the windings inside to be monitored using infrared detectors. Rising temperatures would indicate winding degradation which could lead to failure of the transformer.

Clinton shut down on May 8, 2017, for a refueling outage. The activities scheduled during the refueling outage included performing the Doble testing on the Division 2 4,160-volt to 480-volt transformers. But that work was canceled because it was estimated to extend the length of the refueling outage by three whole days. So, Clinton restarted on May 29, 2017, without the Doble testing being conducted. As noted by the NRC special inspection team dispatched to Clinton following the repeat event in 2017: “…the inspectors determined that revising the model work orders [i.e., the Doble test procedure] alone was not a CAPR. In order for the CAPR to be considered implemented, the licensee needed to complete actual Doble testing of the transformers.”

One finding was the violation of 10 CFR Part 50, Appendix B, Criterion XVI, “Corrective Actions,” for failing to implement measures to preclude repetition of a significant condition adverse to quality. Specifically, the fixes identified by the owner following the December 2013 transformer failure were not implemented, enabling the December 2017 transformer to fail.

Glass half-empty: All the aging transformers at Clinton were over 25 years old and heading toward, if not already in, the wear out region of the bathtub curve. Lightning may not strike twice, but an aging jackhammer strikes lots of times (until it breaks).

Could another untested, unreplaced aging transformer fail at Clinton? You bet your glass.

Dave Lochbaum is the director of the UCS Nuclear Safety Project and one of the nation’s top independent experts on nuclear power.