By Jason Maynard
Mid- to large-sized enterprises have, for many years, built the operational technology (OT) environment like an egg – a hard exterior protected by traditional security elements such as firewalls, IDS/IPS, and malware detection (if you are lucky) with a soft interior leaving critical operational assets at risk against advanced threats and non-existent visibility.

As companies continue to digitize bringing real-time analytics to the business and to their customer’s, isolation is no longer viable. Visibility into the operational network has become critical in order to maintain secured operations of the process.

Network behavioral analytic platforms overcome the visibility and security analytics challenges by maximizing existing investments in your network infrastructure. It collects the rich network telemetry (IPFIX, sFlow, etc.), and performs a baseline of the network environment using behavioral analytics and multilayered machine learning to detect what is abnormal. We will discuss this in more detail, but first let’s discuss the challenges most organizations are faced with today.

RELATED STORIES
Know Your Vendor before a Partnership
IIoT is Here, but Learn to Secure
Reliance Beyond Your System
Security, Connectivity: A Tight Balancing Act

A hard exterior may include one, many, or all of the following items: Firewalls, intrusion detection/prevention systems, content protection, DNS-based controls, malware inspection, and email.

These controls and inspection points may exist at the edge of the operational environment and/or within the business network. This in the past reduced a significant amount of risk to the operational environment, but in today’s world it is no longer enough. Leveraging a soft interior presents a variety of risks over and above what the hard exterior is able to mitigate. 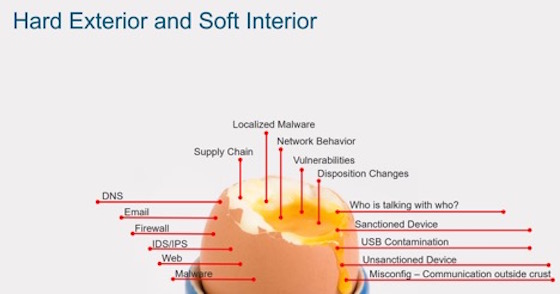 Having a soft exterior may present the following concerns:
• Supply Chain: The firmware you downloaded was compromised by a bad actor – would you be able to determine or alarm on subtle behavioral changes to the network indicating something of interest?
• Normal Operations: Do you truly understand how the network operates 24x7x365, and are you able to detect changes based on new behaviors? These changes may be related to a security event; however, they also may be based on a misconfiguration, all of which may impact your operational process.
• Localized Malware: Malware introduced to systems from field technicians, contractors, USB keys, etc. As the infection takes hold, it starts to communicate and move laterally. Would you be able to detect the changes to the network behavior based on this new threat?
• Vendors/Contractors Access: This brings up a significant amount of risk to the operational environment as the vendors/contractors’ asset may be compromised and/or misconfigured causing disruption to the operational process. There are a variety of ways to mitigate this risk, but it goes beyond the writing of this article. If assets are connecting, would you be able to prove whether a vendor/contractor actually caused the outage within the operational space? Having a transaction of all communications that take place during the time the asset is connected will provide much needed evidence. Additionally, having the ability to alert on interesting traffic patterns may give you the insight into an upcoming event.
• Protection Agents such as Antivirus and Antimalware Protection: Not all assets within the operational environment will support agents and/or the vendor will not allow agents onto systems and if installed, the vendor may revoke support. Also, not every flow may traverse a control or inspection point. The network provides an opportunity to detect anomalous and/or bad behaviors without the need of an agent.
• Confidence in the Control: Are you certain the controls in place are working 100 percent of the time? What about the fat-finger syndrome when adding a control? Are systems talking to systems they should not be? Can you prove the process is pristine at any point in time? The network provides flow data which can provide long-term transactions of all communications taking place.
• Compliance/Audit: Today the audit process may include examining multiple access control lists and requires multiple teams highlighting a control exists and the communication to the environment meets the compliance requirement. Does this really ensure the control was accurate throughout the year or only during the time of the audit? Can you prove throughout the year with 100 percent confidence the environment did not communicate outside of the accepted boundaries? The network can provide you the ability to go back throughout the year and prove the control was in place and no unauthorized communication took place.

These are some simple examples of some of the challenges and risks when leveraging a hard exterior only.

These platforms can also provide the ability to do full or selective packet capture in areas that require you to maintain the capture of a packet for compliance or other reasons. This tool can be leveraged by a variety of teams including: Operational teams, networking teams, applications teams, security teams, and audit/compliance teams, and the super hero team (one person doing many roles).

Network behavioral based analytic platforms with machine learning, and security intelligence should be 100 percent out-of-band as this is a recipe for success within the operational environment.
Jason Maynard is a senior consulting system engineer for cybersecurity at Cisco.