The report found of all the industries polled, manufacturing seemed to be the most worrisome as 94 percent agreed that organizations need to take mobile security more seriously, according to the third annual Verizon Mobile Security Index Report.

Speaking of manufacturers, the research found:

Manufacturing wasn’t the only industry overlooking mobile security. In fact, quite a organizations overlook the most basic mobile cybersecurity principles, leaving themselves and their customers vulnerable to attacks.

The overall study found four out of 10 respondents (43 percent) reported their organization had sacrificed mobile security in the past year. Those that did were twice as likely to suffer a compromise.

Those that sacrificed security last year, 39 percent of organizations suffered a security compromise (up from 33 percent reported in 2019, and 27 percent in 2018).

“In today’s world, mobile connectivity is more important than ever. Organizations of all sizes and in all industries rely on mobile devices to run much of the day to day operations, so mobile security is a priority,” said Bryan Sartin, executive director, global security services with Verizon. “The types of devices, diverse applications and further emergence of IoT devices further complicate security. Everyone has to be deliberate and diligent about mobile security to protect themselves and their customers.”

In the manufacturing sector, 41 percent of companies in this sector admitted to having suffered a compromise involving a mobile device in the past year, according to the report. That has almost doubled since the previous report, when 21 percent reported being hit.

A security breach can disrupt manufacturing systems and processes, with serious financial implications, the report said. In early 2019, a global aluminum producer which the report didn’t name, but is Norsk Hydro was hit with a ransomware attack that disabled 22,000 computers across 40 different countries. So far, the recovery process has reportedly cost it over $55 million. 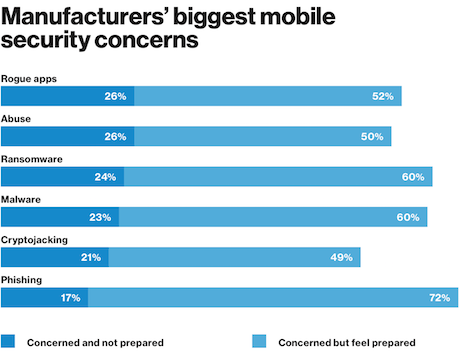 Manufacturing and construction employees often work in high-risk, hazardous environments. If a distributed-denial-of-service (DDoS) attack disrupted critical systems, or a hacker tampered with data like temperature readings, it could put staff in physical danger.

Despite the serious consequences that could result from a breach, 50 percent of manufacturers admitted they had sacrificed mobile security to “get the job done.” As in other sectors, this was shown to have consequences. Manufacturers that said they had sacrificed mobile security were 1.9 times as likely to have suffered a breach.

In addition, 67 percent of manufacturing, construction and transportation companies that had suffered a mobile security compromise said the impact was major.

Click here to register for the manufacturing industry report.