Tens of thousands of pounds of unspecified flammable vapor released during a fire earlier this month at ExxonMobil’s Baton Rouge, LA, refinery, but most of the material was consumed by the blaze and none of it escaped the plant in concentrations that could have posed a risk to people, company officials said.

In a report — required under state Department of Environmental Quality (DEQ) guidelines — ExxonMobil said while some “reportable quantities” of some materials were detected at the site of the fire, there was no risk outside ExxonMobil’s property.

“Since air quality monitoring did not detect any impact outside of the facility, assessments by (various agencies) indicated that neighbors did not need to take any action. Therefore, no alert was issued by the city or emergency response agencies,” ExxonMobil said in a Q&A that accompanied its report to regulators.

The company said more than 13,000 pounds of sulfur dioxide released, along with 2,681 pounds of cancer-causing 1,3 butadiene. It said up to 98 percent of the chemicals burned in the blaze.

No one was injured in the incident.

As a result of the blaze and Exxon’s response, a state senator will hold a hearing Wednesday night to explore how the industrial giant responded to the fire and whether its notices during the blaze were sufficient to ensure public safety.

The ExxonMobil refinery and company facilities that produce chemicals, resins, polyolefins and other material are in a lightly populated area of North Baton Rouge west of Interstate 110. The report said winds were mainly blowing from east to west the night of the Feb. 11 fire, meaning fumes and smoke would have been carried over the Mississippi River and not into populated areas.

Other chemical totals in the blaze were benzene, another carcinogen, at 33 pounds; liquid sulfuric acid at 35,290 pounds; and five barrels of oil. The precise totals for 1,3 butadiene and flammable vapor are 2,681 pounds and 62,093 pounds, respectively. All these amounts exceeded the reportable quantity threshold, but ExxonMobil said none of the 126 readings it took detected the material escaping the plant. 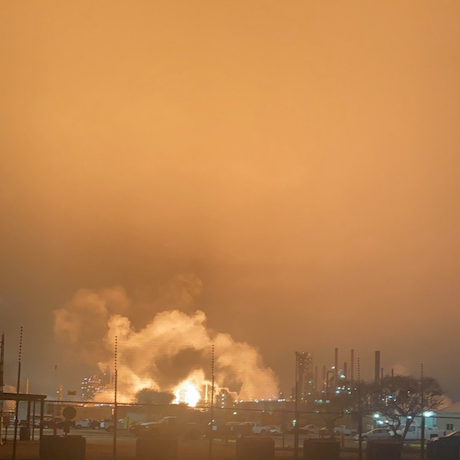 A fire that broke out at the ExxonMobil refinery in Baton Rouge is now extinguished.
Source: Twitter

The incident also involved the release of hydrogen sulfide, but it did not exceed the reportable quantity threshold, which is 100 pounds, ExxonMobil said in the report to DEQ.

The company said it began air monitoring at 11:30 p.m. around the hot zone of the fire, less than 15 minutes after the fire was discovered at 11:16 p.m.