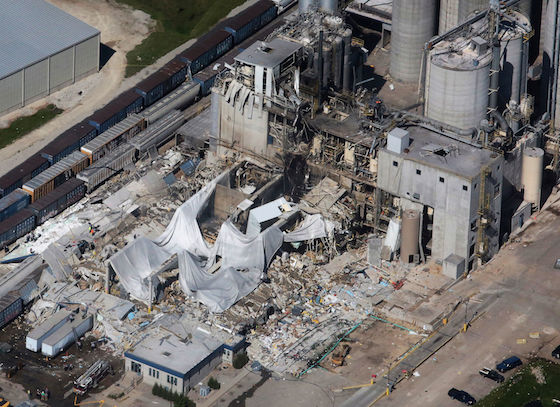 Workers believed conditions at the Didion Milling facility in Cambria, WI, were running normal at the time of a fatal blast that killed five and injured 14 others last May, federal officials said.

The explosion occurred in Didion’s “dry corn milling” facility, where raw corn is processed to create a variety of corn products, said officials at the Chemical Safety Board (CSB).

The dry corn milling process – especially the acts of grinding and separating individual kernels of corn into distinct components – produces corn dust. Corn dust is combustible and is known to be explosive under certain conditions. In the inquiry, CSB investigators were able to glean the perspectives of 10 of the 14 survivors as the events unfolded the night of the incident.

The CSB found:
• Workers believed the conditions at the mill on the night of the incident were “normal,” and up until just moments before the explosions, workers either were unaware of any problems or assumed their troubleshooting efforts would reveal a typical and manageable situation.
• Prior to the explosion workers reported seeing and smelling smoke coming from the facility.
• Several workers entered various mill buildings to locate the source of the smoke, but were unable to immediately find the cause.
• Approximately 15 to 30 minutes before the explosions, workers focused their inspections on a piece of equipment called a gap mill. Workers then observed an air filter blow off the gap mill’s air intake line, resulting in corn dust filling the air and a three- to four-foot flame shooting from the air intake line.
• Around 11 p.m., one or more explosions occurred. The explosions caused the complete collapse of four of the nine buildings that make up the Didion facility; the remaining five were severely damaged.
• There were 19 workers at the facility that night. Five workers died as a result of the explosions and the collapse of the buildings. The other 14 workers sustained injuries that ranged from minor to life-threatening.

The CSB’s full technical analysis of the incident and its examination of dust management at Didion are still underway and will be included in its final report, which will also explore the conditions that influence the safe management of combustible dust and the challenges associated with dust explosion prevention.