Preparing for a Chemical Attack

The United States needs to have security measures in place to prevent or minimize the possibility of a chemical attack.

The question remains, though, are the proper security personnel ready? In addition, does the U.S. have effective medical responses that consider the quantity of medical supplies needed, transportation of those supplies to the scene, and medical facilities and personnel to care for the injured.

All those questions and issues are the reason why the Department of Homeland Security (DHS) Science and Technology Directorate (S&T) developed a suite of models at its Chemical Security Analysis Center (CSAC). These models help federal agencies analyze threats, vulnerabilities and consequences of potential attacks to prioritize resources for the most effective defense and response.

The Chemical Consequence and Threat (CCAT) Tool, part of S&T’s All-hazards Countermeasure Assessment and Planning Tool (CAPT WEB), can rapidly calculate the number of people who would be killed or injured from a chemical release, the factors that might make the release catastrophic, and the current ability to respond to such an emergency.

The CCAT Tool, which has a library of 184 chemicals and 37 representative targets, allows users to quickly evaluate the severity of an event and the impact of various response and mitigation strategies. The approach captures the inherent uncertainty of these events by randomly sampling values of key parameters, such as weather conditions, chemical mass used, population density, evacuation times, and calculating the result many thousands of times. These results ultimately highlight opportunities for investment to make the defense of the nation more robust. 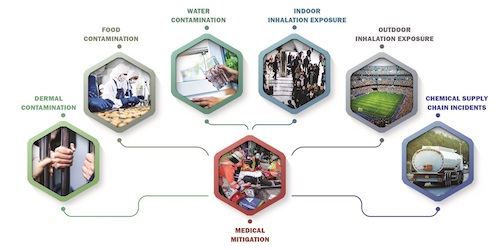 This graphical representation of the Chemical Consequences and Threat (CCAT) Tool shows how the six main categories of targets feed into the Medical Mitigation model.

The Homeland Security Presidential Directive-22, which is currently being updated, requires analysis of chemical terrorism as a critical element of the nation’s domestic chemical defense policy.

“To support this analysis, CSAC’s Chemical Hazard Characterization Program allows DHS to understand what is happening with chemical events around the world, what we need to plan for now domestically, what we may need to plan for in the future, and what actions have the largest effect on our ability to prevent or respond to an attack,” said Rachel Gooding, senior research scientist at CSAC.

In 2012, CSAC started developing a desktop tool that could rapidly calculate the expected consequences from a chemical release and the impact of the response. The input data, which characterizes the hazard, targets and the public health response, is included in the models as default values or distributions providing a fast and flexible platform for users. Typically, 10,000 calculations are performed in two to three minutes to provide the user with a range of possible outcomes, including the best case, worst case and most likely outcome.

CCAT is a planning tool that consists of six different consequence models, which cover different types of targets. The tool calculates the number of people who are expected to receive a life-threatening, severe or moderate injury based on the concentration and toxicity of the chemical, how long they were exposed, as well as emergency responses including sheltering in place, evacuations or food recalls.

Additionally, a medical mitigation model characterizes the current ability to respond and treat people considering available resources, number of people impacted and, and how quickly medical intervention is needed. The analysis helps users evaluate the potential severity of an event and the impact of various response and mitigation strategies, such as more, better or faster countermeasures or the impact of detection or evacuation, and even the impact of others affected on the ability to effectively respond to a large- scale chemical event.

As it only takes milliseconds to run a single simulation, analysts can rapidly identify sensitive parameters and choke points, and can explore the boundaries of what is possible in a response.

“Tools like CCAT provide a systematic and analytical way of prioritizing what we should protect against, how we can best protect against it, what hazards need to be better characterized through experimental work, and where the smartest investments are,” said Gooding. “This is a way of making sure federal dollars are spent the wisest way possible to understand and defend against the most consequential threats we are facing. Ultimately, that is why we are doing it – to save lives.”