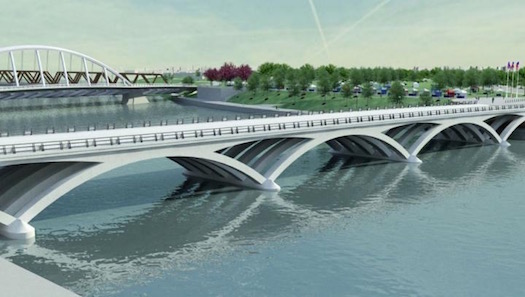 A new generation of indestructible bridges could be possible.

A design process called ‘form-finding’, inspired by the natural world, is now going to a new level thanks to University of Warwick Emeritus Professor Wanda Lewis in the School of Engineering.

Form-finding enables the design of rigid structures that follow a strong natural form — structures sustained by a force of pure compression or tension, with no bending stresses, which are the main points of weakness in other structures.

This could, for the first time, lead to the design of bridges and buildings that can take any combination of permanent loading without generating complex stresses.

Such structures will have enhanced safety, and long durability, without the need for repair or restructuring.

For 25 years, Lewis has been studying forms and shapes in nature: The outlines of a tree or a leaf, the curve of a shell, the way a film of soap can suspend itself between chosen boundaries. In all of these natural objects, Lewis observed they develop simple stress patterns, which help them to withstand forces applied to them (such as wind hitting a tree) with ease.

A piece of fabric ends up suspended, and allowed to relax into its natural, gravitational, minimum energy shape; then that shape ends up frozen into a rigid object and inverted. She finds the coordinates of this shape through computation by simulating the gravitational forces applied to the structure. This produces a shape (a natural form) that can withstand the load with ease.

While classical architectural designs are appealing to the eye, they aren’t necessarily structurally sound: “Aesthetics is an important aspect of any design, and we have been programmed to view some shapes, such as circular arches or spherical domes as aesthetic. We often build them regardless of the fact that they generate complex stresses, and are, therefore, structurally inefficient,” Lewis said.

The question of how to build the optimal arch has been argued through history. In the seventeenth century, Robert Hook demonstrated to the Royal Society the ideal shape of a bridge arch is that resembling the line of an upside down chain line — the catenary form. The only other form proposed by classical theory is the inverted parabola. Each of these shapes can only take a specific type of load without developing complex stresses, which are points of weakness. Lewis’ pioneering ‘form-finding’ process fills the gap in classical theory, offering a new mathematical solution in the pursuit of the optimal arch subjected to general loading.