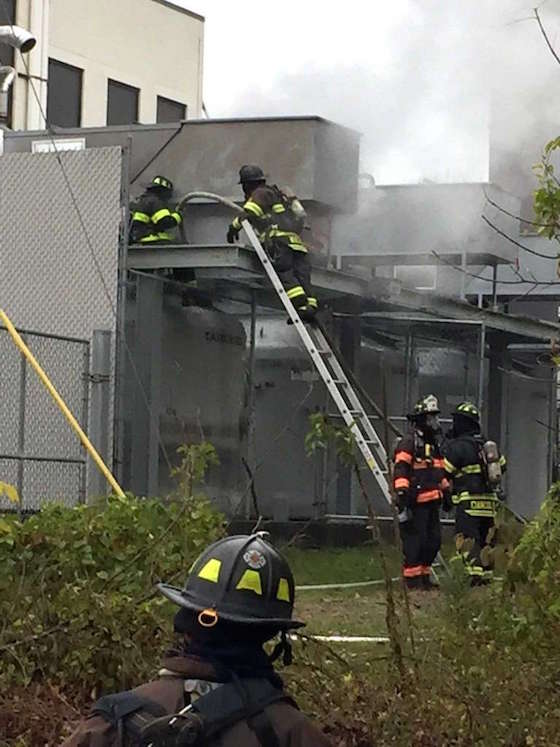 Firefighters hose down a fire at Bedoukian Research in Danbury, CT.

Firefighters spent several hours at Commerce Park in Danbury, CT, Monday after a fire broke out inside an industrial tank.

The fire broke out at 7 a.m. inside an exterior “scrubbing” tank at Bedoukian Research on Finance Drive, officials said. The company makes perfumes and other scents.

He said there are three scrubbing tanks at the industrial site but only one caught fire. The fire was contained inside the tank and firefighters used water to keep the tank cool. Opening the tank and providing oxygen to the fire could make the situation much worse, Omasta said, adding while some water has been poured into the tank, the device is not made to hold water.

“We don’t want to put any more water into the tank because we don’t know how much it can hold before failing,” he said. “There is a specialty cleaning company that is coming by this afternoon with a vacuum truck that can pull the water out of the tank.”

Omasta said they have taken air samples from the area and there is no danger to the community.

Joseph Bania, regulatory affairs officer at Bedoukian Research, said there was no danger to the public as a result of the incident. The fire started inside the tank after it overheated, he said.

Commerce Park was one of the first industrial centers developed in the city after the hatting industry began to decline in the 1960s.