Security Solutions Installed, But Do They Work?

It is one thing to employ security technologies and the assumption is once you put them in, they are working to secure your environment. But are they?

A just-released report found 53 percent of security experts admit they are in the dark about how well the technologies they have are meeting expectations and protecting the network, according to a study conducted by the Ponemon Institute and sponsored by AttackIQ. Ponemon Institute surveyed 577 IT and IT security practitioners in the United States who are knowledgeable about their organization’s IT security strategy and tactics. They are also involved in evaluating or responsible for their organizations’ technology investments. 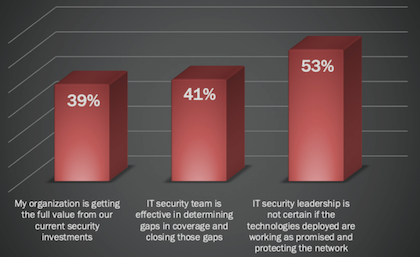 Problems created by not determining the efficacy of security technologies. In the chart strongly agree and agree responses were combined.
Source: Ponemon Institute

Meanwhile, data breaches are likely because of gaps in the IT security infrastructure.

Respondents were asked to rate the certainty of reducing the likelihood of a data breach because of the ability of their IT security staff, processes and security solutions on a scale of 1 = no certainty to 10 = high certainty. In both cases, less than half are confident that data breaches can be stopped with their current investments in technology and staff, with 63 percent of respondents saying they have observed a security control reporting it blocked an attack when it did not.

Companies are spending an average of $18.4 million annually on cybersecurity, but data breaches still happen because of skilled attackers, complex security infrastructure, and a lack of in-house expertise.

Staffing and organizational silos prevent the IT security team from responding to a cyberattack. According to the findings, 25 percent of respondents said the IT security team is able to respond to security incidents within one day. The primary obstacles are created by a shortage of in-house expertise and the lack of timely response and engagement with other departments and functions.

For more details in the report, click here to register.