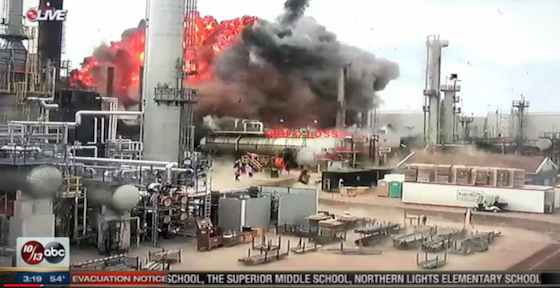 On April 26, 2018, an explosion and subsequent fire occurred at the Superior Refinery Company LLC refinery in Superior, Wisconsin.

Also known as the Husky Superior Refinery, the incident occurred in the refinery’s Fluid Catalytic Cracking Unit (FCCU). As a result of the explosion, 36 people sought medical attention, including 11 refinery and contract workers who suffered OSHA recordable injuries. In addition, a portion of Superior, WI, ended up evacuated. Evidence collected to date suggests similarities with a previous investigation of the February 18, 2015 explosion at a refinery in Torrance, CA.

On Wednesday, February 18, 2015, an explosion occurred in the ExxonMobil Torrance, California refinery’s Electrostatic Precipitator (ESP), a pollution control device in the FCCU that removes catalyst particles using charged plates that produce sparks during normal operation. The incident occurred when ExxonMobil was attempting to isolate equipment for unscheduled maintenance while the unit was in an idled mode of operation; preparations for the maintenance activity caused a pressure deviation that allowed hydrocarbons to backflow through the process and ignite in the ESP.

The Superior and Torrance explosions resulted from the inadvertent mixing of hydrocarbons with air inside the unit that found an ignition source, resulting in an explosion, according to an analysis by the Chemical Safety Board (CSB).

Communities Affected
Both cases also resulted in an impact on the surrounding community. A portion of the Superior community was evacuated and in Torrance, FCCU catalyst dusted the nearby community.

Prior to both incidents, the process hazard analyses identified scenarios in which hydrocarbons flowed into the air side of the FCCU and vice versa due to a failure of the Spent Catalyst Slide Valve (SCSV), but the safeguards listed to protect against those scenarios were ineffective.

In Torrance, the ESP was protected from a flammable atmosphere igniting inside the ESP by carbon monoxide monitors blind to the hydrocarbons that eventually fueled the explosion. The Superior Refining Company considered a scenario initiated by the SCSV failing open and listed a separate control system as a safeguard. Because the SCSV was closed but had an erosion hole in the orifice port, the separate control system was ineffective at stopping the air migration into the hydrocarbon side of the FCCU which caused the explosion.

Both incidents also occurred while the FCCU was not in normal operation.

One of the Key Lessons from the CSB’s Torrance investigation stated: “It is important to consider all modes of operation – including non-routine operations such as unit standby – when performing process hazard analyses. Incident scenarios could be possible during non-routine modes of operations that may not have been considered when analyzing process hazards for normal, continuous operation.”

Furthermore, both incidents occurred toward the end of an operating cycle. The Superior FCCU was shutting down for a turnaround after running since 2013, the last unit turnaround. The Torrance FCCU was nearing the end of an operating cycle and equipment had been in operation since either January 2009 or March 2010 when the February 2015 explosion occurred. The CSB’s Torrance investigation report noted: “It is essential to schedule and perform maintenance of safety-critical equipment so that the equipment is available to perform its safety-critical function.”

Relying on SCSV
Both incidents involved the company relying on a SCSV to maintain a barrier between the hydrocarbon and air sides of the FCCU during non-routine operation. The CSB has determined the FCCU SCSV used at the Superior refinery was “designed for complete shut-off of flow” and that even though it was subject to erosion from the FCCU catalyst, it was intended to be “provided with erosion protection suitable for the design life at the design conditions.” Despite this, the FCCU SCSV was unable to maintain a catalyst level to prevent air from mixing with hydrocarbons in the FCCU during the shut-down.

In its investigation of the Torrance incident, the CSB inspected the internal components of the SCSV. The inspection found the valve internals eroded to the point that the valve could not seal. An area of approximately 16 square inches eroded away during six years of operation, providing an open path for catalyst to flow through the valve even when in the fully closed position. The erosion prevented the closed SCSV from developing the necessary catalyst barrier on the day of the incident.

Given the similarities between these two incidents, the CSB will be examining areas of further improvement that need to be taken by industry. It should be noted as a result of the Torrance investigation, the CSB made a recommendation to American Fuel and Petrochemical Manufacturers (AFPM) to set up forums for its members to discuss the causal factors of this incident to prevent similar incidents. In a letter dated August 3, 2017, AFPM provided the CSB with dates of various forums in which fluid catalytic cracking unit engineers and other relevant personnel from AFPM member companies were invited to discuss the causal factors of the CSB’s investigation report and encouraged to share topics such as design, maintenance, and procedural practices that can prevent a similar incident. As a result of these activities, the CSB voted to change the status of the recommendation to Close-Acceptable Action.

Safety Changes
The CSB’s Torrance investigation also recommended the Torrance refinery make changes to the way safety critical equipment, such as the SCSV, was maintained and to ensure there were operating procedures for each mode of operation.

After the incident, the Torrance refinery stated the refinery conducted a review of the FCCU safety critical devices and implemented the following:
• Identification of all safety critical equipment
• Consequences of failure for each mode of operation
• Evaluated and established parameters, limits, and associated equipment to ensure an appropriate steam-induced pressure barrier for FCC Emergency Shutdown and Safe Park procedures
• Updated Emergency Shutdown and Safe Park procedures to address the loss of catalyst seal, loss of steam barrier, and failure of the ESP to de-energize
• Evaluated additional isolation facilities between the main column and the flue gas system
• The Torrance refinery also formed a cross-functional team of experts and developed an FCCU Safe Park procedure and updated the FCCU Normal Shutdown, Emergency Shutdown, and Start-up procedures for the Torrance Refinery

The Torrance refinery reviewed areas of higher risk or with a higher vulnerability through an independent risk assessment to ensure that adequate layers of protection were in place during stand-by mode and other operation modes.