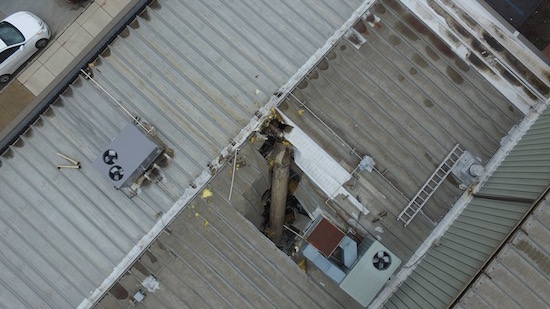 A vertical condensate storage tank from the Loy-Lange Box Company exploded and crashed through the roof of Faultless Healthcare Linen across the street killing three workers on their first day.

The vessel that launched into the Faultless Linen building in St. Louis April 3 killing three people at the laundry business and one at a box manufacturer was a vertical condensate storage tank, technically referred to as the SCR or semi-closed receiver, federal officials said.

The SCR provided the condensate or hot water to a steam generation and supply system supporting a corrugated box manufacturing process at Loy-Lange Box Company. That process was in the process of starting up on the morning of the incident.

Initial visual examination suggests the bottom pressure boundary of the SCR failed. Once the SCR unit is removed from the building, Chemical Safety Board (CSB) investigators will conduct a more thorough inspection of the SCR.

According to initial calculations performed by CSB investigators, the SCR contained about 510 gallons of water and operated at about 330°F and 100 psig.

When the vessel failed, the hot condensate jetted from the bottom, converting from hot water to steam. The power of the jet of water rapidly turning to steam broke the vessel loose from its piping attachments and fastenings, propelling it through the internal structure and roof of the building. The downward force of the steam launched the 3,000-pound vessel with a speed of about 120 mph, about 425 feet into the air and about 515 feet from its starting point. The SCR remained airborne for over 10 seconds.

The structural integrity of both buildings is still being assessed. One crew was able to enter an area deemed safe at the Loy-Lange facility to 3-D photo-document the scene. This information will help further assess the site and determine next steps to stabilize the building and the location of potential evidence.

Protocols to remove the SCR from the Faultless building are in development. The failure mode of the SCR is unknown at this early stage in the assessment, however, in cases of vessel failure it is typical for the CSB to examine issues of vessel operation, preventive maintenance, and mechanical integrity.