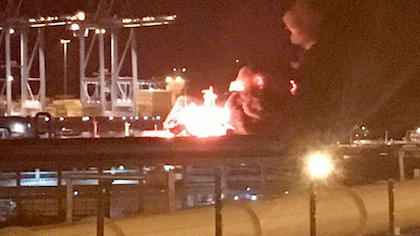 An LPG tanker explosion in Turkey left one worker dead and 16 others injured.

An explosion on an LPG tanker killed an Italian crew member and injured 16 others at the port of Aliaga in Turkey’s western Izmir province late Monday.

Despite the blast, though, work at the petrochemical plant continued, its operator said.

The vessel was anchored at harbor at Petkim petrochemical plant operated by the Azerbaijani state oil company SOCAR.

“At Petkim Pier 5 around 23:20 (2020 GMT), a fire broke out due to an unspecified reason during the connection to the Italian flagged Synzania for the filling of liquid hydrocarbons,” Petkim said.

“As a result of the immediate intervention of our teams, the fire was extinguished and cooling work on the ship is continuing,” it added.

SOCAR said an investigation into the fire was ongoing. Operations at the Petkim plant and SOCAR’s STAR refinery were continuing, it said.

“Neither Petkim, nor STAR were closed for investigation. All facilities at Petkim continue operating as usually. The vessel on which the accident happened does not belong to SOCAR,” SOCAR said.