EDITOR’S NOTE: The following is the second part of a two-part series on responsibilities of communities, companies and first responders when it comes to chemical safety incidents.

There is no way around it, chemical manufacturers are often located within communities, and for the most part, everything works and goes along smoothly, but in case of an emergency, effective response training and planning, as well as communication between a company, first responders, and the community, are critical to preventing injuries and fatalities from incidents.

First responders, companies, and residents all play a crucial role in ensuring risks and hazards present in the community are well-understood, and there are ongoing discussions on how to mitigate or respond to them. In addition, everyone has to be on the same page.

To that point, the Chemical Safety Board (CSB) highlighted key responsibilities of first responders, communities, and companies pertaining to responding to chemical incidents: 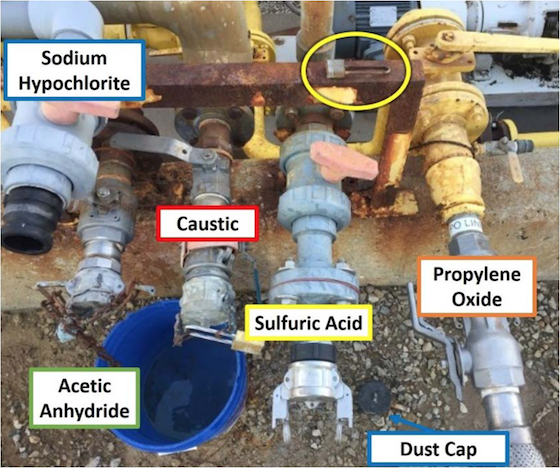 On October 21, 2016, a chemical release occurred at the MGPI Processing, Inc. (“MGPI”) facility in Atchison, Kansas, when a chemical delivery truck, owned and operated by a different company, inadvertently connected its sulfuric acid hose to a tank containing sodium hypochlorite, better known in its less concentrated form as bleach. The chemicals reacted and generated a toxic vapor cloud, which led to a shelter-in-place order for thousands of residents. At least 120 MGPI employees and members of the public sought medical attention as a result of the incident.

Key Findings
The CSB found neither the city nor the county adequately trained for such a potentially catastrophic incident. While all important, a majority of recent emergency response training and exercises focused largely on infectious diseases, active shooter situations, and severe weather events. These training exercises did not include incidents at chemical facilities or incidents involving accidental releases of unknown chemicals in the community.

Following the incident, city and county emergency responders conducted a post-incident evaluation to examine issues identified during the response. The After-Action Report and Improvement Plan (AAR & IP), issued by the Atchison County Department of Emergency Management (ACDEM), identified several areas for improvement. For example, there were challenges communicating the incident to the public as well as updating the local hospital; and the CodeRED community notification system, which is a mass notification system that can alert and inform subscribers of emergencies through many channels, failed to send notifications out at the time of the incident. Local emergency responders used social media and local radio and television instead to communicate details about the incident. ACDEM noted the CodeRED notifications did not get sent due to a lack of training on the system.

Hospital staff reported they were not kept informed of the status of potential victims and decontamination procedures for the chemicals released during the incident. In addition, incident command system personnel did not directly communicate information regarding the released chemicals to the hospitals until up to two hours after the incident began. According to ACDEM, a plan has been established with local hospitals to have a representative at the emergency operations center or command post to ensure the representative is up-to-date on all information.

The AAR & IP also identified the need for more operational coordination and a liaison to communicate exposure information during similar incidents. Following the incident, MGPI increased its involvement with local emergency planners and responders. Less than two months after the incident, MGPI hosted training with local emergency responders to discuss the hazards of chemicals used at the MGPI facility. Three separate sessions were held. In addition, in October 2017, MGPI attended and participated in a Tabletop Exercise in Hiawatha, Kansas, where a chlorine gas release resulting from a railcar derailment was simulated.

Emergency responders and facilities have also increased participation in the Atchison County LEPC, and in March 2017, the LEPC conducted a tabletop exercise of the incident that occurred at MGPI. MGPI also requested its Emergency Response Plan be discussed at the end of each year. 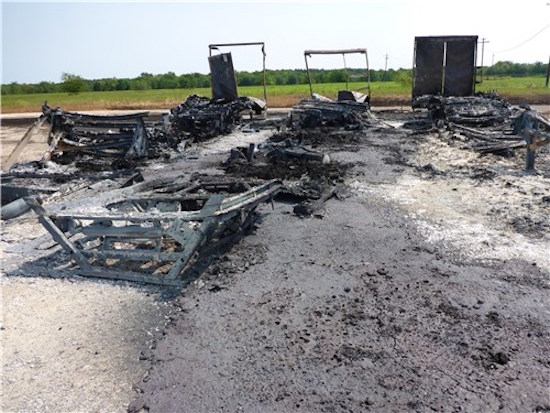 Photo shows the devastation that occurred at the Arkema chemical plant in Crosby, TX, after Hurricane Harvey hit the area. Explosions wiped out chemical storage pods at the facility after refrigeration units were not able to operate due to the flooding.

This flooding exceeded the equipment design elevations at the Arkema Inc. (“Arkema”) facility in Crosby, Texas, and caused the plant to lose power, which disabled the critical organic peroxide refrigeration system. The flooding eventually forced all Arkema employees to evacuate the facility. Additionally, residents within a 1.5-mile radius of the facility were evacuated. On August 31, 2017, the organic peroxide products stored inside a refrigerated trailer decomposed causing the peroxides and trailer to burn. Twenty-one people sought medical attention from exposure to fumes generated by the decomposing products when the vapor travelled across a public highway adjacent to the plant. Emergency response officials initially decided to keep the highway open even though it ran through the established evacuation zone around the Arkema facility.

The CSB recommended Harris County update its emergency operations training using lessons learned from the Arkema incident to help ensure that personnel enforcing evacuation perimeters are not harmed by exposure to hazardous chemical releases. The CSB advised the county update existing protocols and revise training curricula to include the use of analytical tools, air monitoring, and personal protective equipment, to provide appropriate protection when emergency equipment or personnel need to be moved through an evacuation zone during a hazardous materials release.

Emergency Response and Planning
In at least 16 CSB investigations, there are important key lessons to aid in planning for and responding to an emergency involving hazardous materials that when implemented will help minimize the number of fatalities and injuries.