A freight train carrying flammable chemicals derailed Tuesday afternoon at a rail yard in Dupo, IL, causing a fire that forced an evacuation of schools and nearby homes.

A few hundred utility customers lost power, according to Ameren Illinois. However, no one was injured in the incident, said St. Clair County Emergency Management Director Herb Simmons.

By 4 p.m., more than three hours after the train derailed, emergency crews had extinguished the fire and were cleaning up the yard, Simmons said. By that point, the air was clear of smoke and traffic was once again moving freely through this small community, after hours of road closures restricted access near the site of the accident.

But for much of the afternoon, black smoke rising into the sky could be seen for miles.

Rail yard operator Union Pacific said the train derailed at about 12:45 p.m., at 4400 Carondelet Avenue. The fire billowed west of North Main Street and north of Carondelet. The railroad said in a statement that the tank car that first caught fire contained a liquid called methyl isobutyl ketone, which is typically used as a solvent.

Simmons initially said 13 cars derailed; one held ethanol and three others plastic granules, all which fed the flames. But by day’s end, Union Pacific spokeswoman Kristen South said the tally increased to 14 cars and ethanol was not involved.

“From my understanding, the only car that caught on fire was the tank car with methyl isobutyl ketone,” she said. 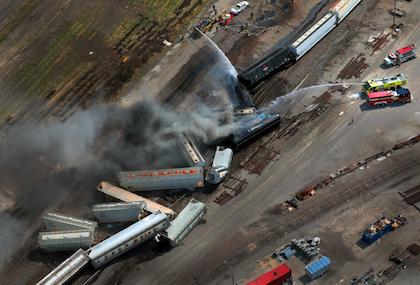 Firefighters work to put out the blaze of a freight train that was carrying flammable chemicals.

She said Union Pacific could not yet identify the owners of the train cars.

Ameren had to cut power to high-tension lines running over the fire, St. Clair County said. Ameren Illinois said several hundred customers were without electricity for a few hours. Electricity was restored by 3:20 p.m., the company said.

South said evacuations were lifted at about 3:45 p.m., following an air-quality test. The company’s environmental contractor will continue to monitor air quality downwind and southwind at least 5 miles from the yard, South said. Railroad HazMat workers will stay on site until cleanup is finished.

Simmons and South both said the smoke from the fire didn’t pose a significant health hazard.
The cause of the accident is being investigated.