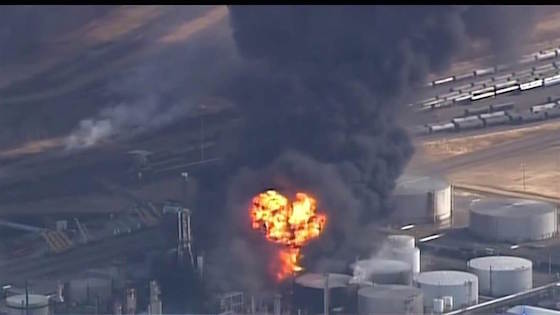 Flames roar after a refinery plant explosion in Wisconsin this past April where at least 11 people suffered injuries and forced an evacuation of the surrounding area.

It wasn’t that long ago when the Husky Energy oil refinery started shutting down early in the morning on April 26 in preparation for a five-week turnaround when an explosion occurred later on, sending 11 people to area hospitals with injuries and forced an evacuation of a large part of Superior, WI.

An interim animation of the Husky Superior Refinery explosion just released from the Chemical Safety Board (CSB) offers more details on the cause of the blast that led to the injuries and fears of fouled air quality in and around the accident site.

“At 5:40 a.m. (April 26) operators took steps to shut down the refinery’s fluid catalytic cracker (FCC) for periodic maintenance and inspection. Within the FCC unit, slide valves control the flow of material between a reactor which contains flammable hydrocarbons and a regenerator which contains air. It is important to prevent mixing the hydrocarbons and air since if they mix an explosion can occur,” said the CSB animation.

The fire at the Husky Energy oil refinery was extinguished late April 26 after the 10 a.m. blast, however an evacuation order remained overnight for Superior, a city of about 27,000 residents that shares a Lake Superior shipping port with nearby Duluth, Minnesota.

A tank of asphalt exploded at 10 a.m. April 26 at the refinery, prompting authorities to order the evacuation of a 3-mile radius around the refinery, as well as a 10-mile corridor south of it where the smoke was headed.

It was unclear how many people evacuated, but Superior Mayor Jim Paine said most of the city was affected. The refinery is in an industrial area, but there’s a residential neighborhood within a mile to the northeast. The corridor downwind to the south of the refinery is sparsely populated.

Schools in Superior and nearby Maple, Wisconsin, canceled classes the next day as a precaution.

Hospital officials said only one of the injured was seriously hurt, with what was described as a blast injury. No deaths were reported, and officials said all workers had been accounted for.

Thick, black smoke that could be seen for miles poured from the refinery hours after the explosion.

Refinery manager Kollin Schade said at the time the smoke was from burning asphalt that was so hot firefighters were unable to attack the fire to try to put it out.

A four-person team from the U.S. Chemical Safety Board rushed to the scene to investigate the blast.

The facility is Wisconsin’s only refinery, and it produces gasoline, asphalt and other products.