A contractor badly burned in last Wednesday’s explosion and fire at an ExxonMobil refinery in Texas said he’s suing the company. When the fire erupted at the Baytown refinery, 38-year-old contractor Alvaro Coronel got caught by the flames.

“I thought I was burning alive pretty much. So I started peeling off my clothes and just run toward the gate,” Coronel said in a published report. The fire fueled panic as workers tried to escape.

“By that time there were two or 300 people just in a frantic, screaming and just trying to get out of there,” Coronel said. 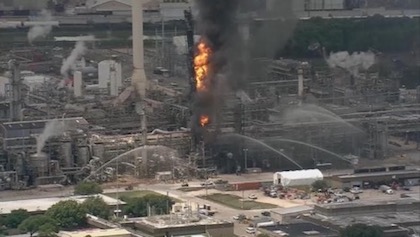 The fire rages at the ExxonMobil olefins refinery in Baytown, Texas.
Source: KHOU

The flames burned for more than five hours and more than 60 workers were treated for what Exxon said were “minor injuries.” But Coronel’s lawyer held up pictures of his arm and neck with what he says are second and third degree burns. Coronel is now suing the oil company for negligence.

“That day, it keeps playing through my mind. I’ve been in chemical plants for years — over 10 years — and that day I thought for sure I was dead,” he said.

In a statement, ExxonMobil said the company is focused on safety and cooperating with authorities on the investigation. ExxonMobil also claimed that workers who received medical evaluations and first aid have been cleared to go back to work.

The fire occurred at the company’s Baytown Olefins Plant, ExxonMobil spokeswoman Sarah Nordin said. The company website describes the complex as one of the largest refining and petrochemical complexes in the world. It’s located about 25 miles east of Houston.

The fire broke out at a polypropylene recovery unit, where the plastic is purified for production. He said crews were working to shut down the units to isolate the fire source.