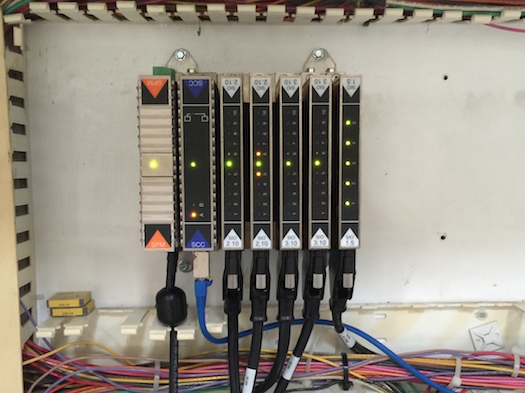 Bedrock Automation system in place at the Russellville, Arkansas Water and Sewer System.

Little Rock, AR-based Brown Engineers, a Bedrock Certified Solution Provider, completed the upgrade in November of 2015 and the system has been performing to specifications ever since.

RELATED STORIES
Emerson Passes Achilles Recertification
IIoT: We Have to get Ahead of This
Security Framework Grows in Usage
ARC: Connected Enterprise a Game Changer

The reason why this is interesting is because last July Bedrock launched an industrial control system that united basic understanding of current systems, but featured a pin-less, electromagnetic backplane and embedded cyber security. The technology operates like a PLC. The new system addresses control applications with fewer than a dozen part numbers, which cuts down on cyber attack vectors, cuts lifecycle costs and looks at simplifying engineering, commissioning and maintenance.

“The PLCs running automatic control of our digestion blowers, clarifiers, sludge pumps and chlorination chemical feed pumps have become obsolete. So when one of them failed, we wanted to replace it with something that would provide a path to the future,” said Steve Mallett, Jr., P.E., general manager of the City Corporation, which is responsible for the Arkansas pollution control facility. “With its high performance and increasingly important built-in cyber security protection, the Bedrock system offers that, and it has been running without issue since installed.”

Although it is performing essentially the same function as the legacy PLC, the new Bedrock system is different from the legacy PLC.

It uses an electromagnetic backplane instead of a traditional pin-based backplane. The electromagnetic backplane eliminates pin corrosion and breakage, which should improve long term reliability and also enable embedded security by preventing the possibility of using counterfeit I/O modules. It also creates a galvanic isolation barrier between field wiring and the controller and provides a high performance, deterministic I/O update rate to support current functionality and additional planned expansions. The new system is also different from the legacy PLCs in the following ways:
• The Bedrock system runs a military-grade safe and secure real-time operating system, further embedding security into the software and firmware used to control the facility
• It can operate from 90-260VAC or DC power without fans or DIP switches for simplicity and robustness and embeds standard, open system technologies including OPC UA, a fully compliant IEC61131-3 programming environment and standard Ethernet support at the control and I/O networks
• The Bedrock system consists of only a dozen part numbers, reducing installation and maintenance costs
• The system is scalable for more advanced control functions, such as serving as a SCADA Remote Transfer Unit (RTU) or distributed control system (DCS)

“We are seeing increased interest in cyber security among municipal utility clients such as City Corporation,” said Dee Brown, PE of Brown Engineers. “Many want to control security functions from their tablets and control centers, because their networks are getting hammered every day by probes and attempted intrusions. The Bedrock controller gives them another layer of protection beyond firewalls and VPNs. It is unique in that as it powers up, it checks to be sure that all hardware and software components are validated. Regular PLCs just can’t do that.”

The Bedrock controller is part of an integrated plantwide SCADA system. Users connect to that system via Ignition software from Inductive Automation. Ignition is an industrial applications platform that coordinates control and data acquisition for all plant PLCs and remote transfer units (RTUs).