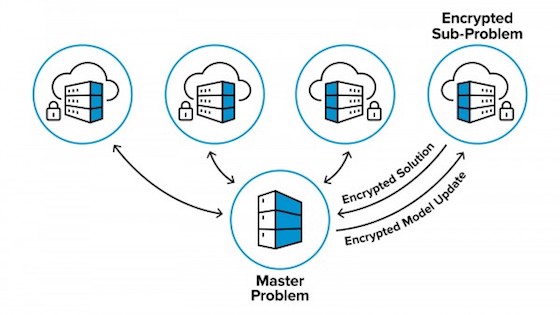 To take advantage of the cloud’s flexible computing power without exposing proprietary or location information, the Argonne team essentially warps, or “perturbs,” the model and data being sent for calculations, changing key variables and equations. A disguised version of the problem goes to a cloud-based “solver” computer, and the answer is returned to a local, secure server for decoding.
Source: Argonne National Laboratory

From power plant output to consumer usage patterns, grid operators juggle a complex set of variables to keep the lights on. Cloud-based tools can help manage all of these data, but utility owners and system operators are concerned about security. That concern is keeping them from using the cloud.

But there are new tools in development to facilitate cloud computing for grid operations and planning. A framework being developed at Department of Energy’s (DOE) Argonne National Laboratory masks sensitive data, allowing grid operators to perform complex calculations in the cloud to determine where and when to dispatch resources.

By facilitating these calculations without compromising data security and integrity, the framework helps grid operators take the electricity system into the future while avoiding costly investments in computer infrastructure.

More and more companies are moving their information technology (IT) systems into the cloud. But adoption among grid operators has been slow, even as smart meters, sensors and other networked components add even more data that must be processed.

“Overall, the cloud has very few power industry users because of the security issue,” said Feng Qiu, a principal computational scientist in Argonne’s Energy Systems division who leads the lab’s data security research. “The cloud is something grid operators want to use, but they have very deep concerns.”

To store data securely in the cloud, a user can encrypt it, but the cloud’s true value for grid operators lies in being able to perform computations on unlocked data, effectively “renting” remote computer power for intensive calculations on the fly. One such calculation is the unit commitment problem, which encompasses the schedule for power plants — how much power they produce and when.

“It’s one very classical problem for the industry, and it’s usually very hard to solve,” said co-investigator Alinson Santos Xavier. “So you need a lot of computational power for that.”

Much of the data involved in such computations is sensitive, revealing critical locations and proprietary business details. To take advantage of the cloud’s flexible computing power without exposing that information, Qiu’s team essentially warps, or “perturbs,” the model and data being sent for calculations, changing key variables and equations. A disguised version of the problem goes to a cloud-based “solver” computer, and the answer is returned to a local, secure server for decoding.

“During the whole process, the real data and model are never on the cloud,” Qiu said. “So even if hackers get the data from the cloud, they can’t make use of it.”

The Argonne team is entering the third year of a five-year project funded by DoE’s Office of Cybersecurity, Energy Security, and Emergency Response to produce the framework. In addition to masking data, the researchers are working on breaking up computational problems further for solving across multiple cloud-based computers.

The result will not only enable faster, more efficient solutions for existing problems but could allow more robust approaches — more precise modeling of generators, for example, or a larger number of scenarios for planning.

“Utilities and independent system operators have limited computational resources,” Qiu said. “This opens the door for them to get more computing power and paves the way for the power sector to transition to cloud computing.”