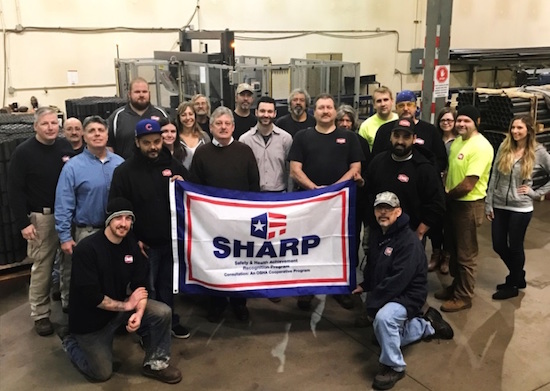 CMS was motivated to create a best-in-class safety program because of their commitment to ensure the safety and well-being of all their employees. This commitment led CMS to evolve from being purely a specialty mechanical contractor working in confined spaces to a safety and rescue company.

Since CMS’ participation in Occupational Safety and Health Administration (OSHA) On-Site Consultation Program began, a superior level of safety has been the end result.

CMS improved upon its safety hazards, such as machine guarding and implemented aggressive administrative and engineering controls when working in permit-required confined spaces. Machinery and personal protective equipment were better, less costly to own, and easier to use. CMS found productivity in their repair division rose dramatically.

“If it were not for the Program [On-site Consultation], we would not have attained the high level of safety that we have today,” said CMS Director of Safety Alan Schullo.

CMS is a specialty mechanical contractor that specializes in the inspection and repair of tubular air heaters and rescue services. The company has been in business for 30 years, providing service to pulp and paper mills, waste-to-energy plants, electric utility generators, and refinery operators. Over the years, the company developed methods for creating safe productivity increases while maximizing worker safety in permit-required confined space environments.

Good, Wanting to get Better
CMS knew of the On-site Consultation Program through their knowledge of OSHA’s Safety and Health Achievement Recognition Program (SHARP) and Voluntary Protection Program. Before working with OSHA, CMS believed their safety program was very good compared to other companies in this high hazard industry.

Upon closer review, they realized gaps existed in their safety program. CMS believed even though they often spoke of safety, they were not “walking the walk.” They decided it was time to take action and make an absolute commitment to safety, financially and organizationally. To be successful and exceed expectations, CMS decided to partner with the Illinois On-Site Safety and Health Consultation Program.

OSHA’s On-site Consultation Program offers free and confidential safety and occupational health advice to small and medium-sized businesses in all states across the country and in several territories, with priority given to high-hazard worksites. On-site Consultation services are separate from enforcement and do not result in penalties or citations.

With the assistance of Illinois On-site Safety and Health consultants, CMS identified and addressed the safety gaps which significantly helped to reduce their hazard incidents.

The consultant identified three of CMS’ large saws in their production department lacked guarding. The machines were manufactured with little safety guarding and no manufacturer input on guarding. To begin the safeguarding project, CMS contacted Rockford Systems, LLC, headquartered in Rockford, Illinois. Rockford Systems is a company that designs and delivers machine safeguarding solutions to organizations working with industrial machinery.  Working with Rockford Systems, CMS enclosed hard guarding panels, installed lock safety switches, interfaced the lock safety switches and light curtains, and installed appropriate danger signage for each piece of equipment (saws and cutters) at their production facility. The total cost of the project, which did not reflect equipment out-of-service time during the upgrades, was $88,246.43.

Safer, Productive
After the first consultation visit, CMS realized the more they practiced safer processes, the more productive they became. Proactive safety has made CMS faster at what they do. For example, CMS conceived, designed, and implemented proprietary air heater repair techniques that resulted in faster, safer, and more predictable repair projects that met or exceeded even the most aggressive deadlines.

CMS said from the beginning of the program, they took an unconventional approach to safety.

Instead of developing repair procedures and then applying safety management to the procedures, they drew upon their years of experience to develop their own procedures and workflow that resulted in deeply ingrained work habits. CMS planned projects to keep workers “out of the line of fire” while maintaining consistent productivity rates. As a result, doing difficult and dangerous work safely in confined spaces became their specialty.

Performance-based Safety
in order to achieve SHARP certification, CMS developed a performance-based safety program aligned with the traditional Hierarchy of Controls approach. The program began with observing and identifying at-risk or unsafe behaviors and taking immediate action to correct them. The corrective action included wearing personal protective equipment and following safety rules. During the early phases of CMS’ behavior-based safety program, they saw many positive results. The staff began to express interest and exert control of the program. The company began to identify core concentration areas for enhancement, such as education, training, communication, procedures, physical plant, equipment, and continuity.

CMS said because of their participation in the SHARP, they have been able to get the job done faster and safer.  This faster and safer expectation has had a profound impact on everyone at CMS and its overall culture. The most visible impact from CMS’ safety programs has been the increase in productivity. They can now easily measure the direct costs of injuries. They believe that the indirect cost savings of preventing injuries may be much greater than simply the workers’ compensation dollars they have saved thus far.

Low Injury Rates
When CMS began its relationship with Illinois On-Site Consultation in 2012, the injury rates were low and remained low throughout the consultative process leading up to approval of SHARP certification.

In 2014, CMS became SHARP certified for the first time.  In 2016, they were approved to continue participating.

“CMS Inc. is proactive in safety and health management which is why we chose to invest in protective measures rather than wait for an injury to occur,” said Steve Turner, CMS Owner.