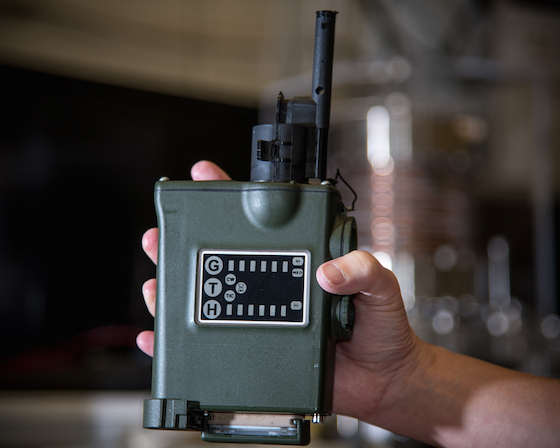 A Joint Chemical Agent Detector equipped with a threshold confidence checker in black, on top.
Photo by Jason Stoughton/NIST

The Joint Chemical Agent Detector (JCAD) has become an important defense tool on battlefields and in war-torn cities over the last few years.

About the size and shape of a VHS tape or a hardcover bestselling novel, JCADs sound an alarm and begin to light up if nerve agents such as sarin or blister agents such as mustard gas are present.

The detectors are already designed to withstand intense environments and repeated use. But when the Department of Defense wanted a way to check the devices’ sensitivity to chemicals over time, a measurement team at the National Institute of Standards and Technology (NIST) was called in to provide a cost-effective solution.

The result is an accessory device, known as the Threshold Confidence Checker, or TCC, which weighs just a few grams and looks vaguely like a cigarette lighter. The TCCs can be slid on top of the chemical detectors so an exact measurement can be made of each device’s sensing capabilities.

TCCs demand no special operator training or scientific knowledge and offer a repeatable test that costs less than $1 per use. The test takes only a few moments, and detectors do not need to be taken out of service while the critical components are verified.

The small, inexpensive TCCs are vastly different than the first solution that was offered to the testing problem, which involved using a large spectrometer to identify vapors by detecting their chemical signatures in infrared light.

“We realized those wouldn’t work very well in this situation,” said Pamela Chu, the researcher in charge of the NIST team. The heavy spectrometers are about the size of a refrigerator and cannot be easily transported to the kinds of remote places where troops are often deployed. In addition, each spectrometer system can cost more than $100,000 and requires specially trained staff. Detectors would also have to be periodically pulled out of the field and sent in for testing at a centralized depot, often at a distant location.

“The solution we were able to develop instead is inexpensive, effective and reproducible for other, similar detection equipment,” Chu said.

To run a test, an operator simply loads the TCC onto the intake area of the detector. Inside the TCC, a small glass ampoule contains a known quantity of chemical simulants safe and nontoxic to people, but that cause the devices to react as if they had been exposed to the dangerous nerve and blister agents.

Trigger Detector
As the ampoule is crushed, the simulant provides a measured amount of harmless gas meant to trigger the detector just above its set sensitivity limit. If the alarm sounds and a specific number of lights are activated, the soldier or testing personnel know the device is still in working order and can be returned to the field immediately.

JCADs that fail to display the required number of lights are subjected to additional maintenance, and then, if they still don’t pass, are returned to the depot for additional checks and any needed maintenance.

The amount of simulant used for TCCs can end up traced to established standards and reference methods. What’s more, the technology used to develop the current round of TCCs can be replicated as sensor technology evolves and the handheld chemical agent detectors change and evolve, too.

Although the TCCs themselves might need to be adapted or reconfigured, the principles established through their research and development will remain the same and can be repeatedly reapplied.

Research and development for the TCCs was done by Chu and her team over several years, beginning in 2010. The Department of Defense, which funded the research, has now announced it will begin large-scale production of these testing devices, and a private company has already been contracted to make 60,000 for immediate use.