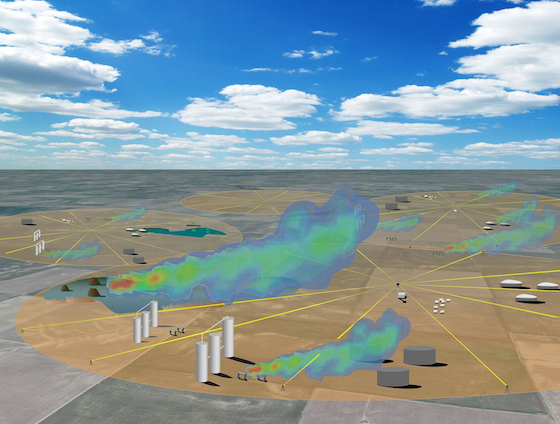 Illustration showing how trace gases are detected in the field using a mobile dual-frequency comb laser spectrometer. The spectrometer sits in the center of a circle which is ringed with retroreflecting mirrors. Laser light from the spectrometer (yellow line) passes through a gas cloud, strikes the retroreflector and is returned directly to its point of origin. The data collected are used to identify leaking trace gases (including methane), as well leak locations and their emission rates.
Graphic by Stephanie Sizemore and Ian Coddington/NIST

Accurately detecting, locating and quantifying leaks of methane, the main component of natural gas and a major fuel source worldwide, is critically important.

To date, traditional methods are slow, labor-intensive, limited to small coverage areas and expensive to operate over time.

Now, researchers at the National Institute of Standards and Technology (NIST), the University of Colorado Boulder (CU Boulder) and the National Oceanic and Atmospheric Administration (NOAA) demonstrated a novel solution that features an innovative NIST adaptation of a Nobel Prize-winning technology to continuously and cost-effectively monitor leaks of methane (CH4) and other trace gases with precision and over large areas.

The demonstration is described in a paper on the subject.

Although its lifetime in the atmosphere is much shorter than the more prevalent greenhouse gas, carbon dioxide (CO2), methane is significantly more powerful than CO2 because it traps more of the sun’s heat pound for pound — about 25 times more over a 100-year period, according to the Environmental Protection Agency (EPA). Taking that difference into account, the EPA estimates the methane leaked or intentionally vented from human activities such as natural gas exploration, storage and pipelining; coal mining; chemical manufacturing and processing; waste management; and livestock farming accounts for about 10 percent of the warming potential of all greenhouse gas emissions in the United States.

Save Lives
Along with the environmental benefits, more reliable methane monitoring also could reduce the number of costly, disruptive community evacuations by catching leaks from residential or commercial lines before they become threats, and save lives and property by helping prevent gas explosions.

Finally, there’s a financial incentive for keeping methane leaks in check. According to the National Resources Defense Council, capturing currently wasted methane for sale could bring in more than $2 billion of additional revenue each year.

Current approaches to methane detection rely heavily on inspectors using infrared (IR) cameras to look laboriously for gas plumes one by one across large sites, such as well fields with hundreds of potential leaks. This is time-consuming, requires skilled operators and may only be done once a year or less because of the high cost for monitoring expansive, remote or otherwise difficult-to-survey areas. Aircraft and vehicle-mounted IR cameras or spectrometers offer another option; however, this method also is expensive and may be ill-suited for continuous monitoring.

Potential users of current methane detection and quantification systems often find the costs prohibitive for meeting three needs: Coverage of large areas, frequent monitoring and sensitivity, said Ian Coddington, a NIST physicist and co-author of the paper on the subject.

“The last one really becomes evident when you realize that leaks may have rates as small as 0.2 cubic meters per hour (6 cubic feet per hour), about one-fourth the respiration rate of an average human being,” Coddington said.

To address these problems, NIST and its partners have developed a novel observing system that combines the world’s first “in-the-field” dual-frequency comb laser spectrometer and an array of corner cube retroreflectors. The spectrometer is based on the frequency comb technology for which NIST’s John Hall shared the 2005 Nobel Physics Prize. And the retroreflectors, special mirrors that send light striking them straight back to their source, exhibit an optical phenomenon exploited by NIST’s James Faller in the early 1960s for his design of the laser reflecting arrays deployed during two Apollo landings to measure the Earth-moon distance.

Optical Frequency Comb
As explained in more detail by a NIST fact sheet, an optical frequency comb is a very precise tool for measuring different colors — or frequencies — of light. Scientists start with lasers that emit a continuous train of very brief (femtosecond, or one millionth of one billionth of a second) pulses of light containing millions of different colors, also known as frequency spectra. The evenly spaced, individual lines of the spectra look like the teeth of a comb, giving the tool its name. The laser pulses — with their millions of highly defined teeth — can serve like the marks on a ruler for measuring the spectral signature of any material through which they pass with incredible precision.

The new trace gas monitoring system uses a NIST-developed evolution of the frequency comb technology, a dual-comb laser spectrometer where a second comb is added.

“When paired, the combs can act like hundreds of thousands of laser spectrometers working in unison, and yield a device that is 10 to 100 times better than a traditional spectrometer and very sensitive to leaks, even at a great distance,” Coddington said. “It is comparable to standing at the Lincoln Memorial in Washington, D.C., and detecting one person exhaling among hundreds near the Washington Monument at the other end of the National Mall.”

In the demonstration described in the paper, researchers ringed a Colorado well field containing multiple methane leak sources with retroreflectors equally spaced along a 1-kilometer-diameter circle. In the center of the ring, they stationed a trailer with the portable dual-comb device inside.

‘Pie Slice’ Detection
To detect and quantify methane leaks within a “pie-slice” section of the circle — the area defined by the arc between two consecutive retroreflectors — pulses from the dual-comb laser are first bounced off one reflector back to the spectrometer to quantify residual gas from outside the field. Subtracting that amount from the measurement made by the second reflector yields the level of methane being released within the arc alone. Data from repeated scans of the sector under varying wind conditions (direction and speed) are interpreted by a NIST computer model to define the leak locations and rates.

According to Kuldeep Prasad, a NIST mechanical engineer who helped design the computer model, combining local meteorological data with the measurements taken from all of the arcs within the ring of retroreflectors provides a complete accounting of the methane escaping from an entire field of wells.

“The monitoring can be done continuously over time so that every leak in a field is accurately detected and quantified,” Prasad said. “Furthermore, if you set up mobile spectrometers at adjoining fields, you can dramatically expand the total coverage area to several square kilometers.”

Above the Action
For gas storage facilities, oil and gas processing plants and other industrial environments where line-of-site leak monitoring isn’t possible, Prasad said the spectrometer can be placed high above the site to detect and quantify methane as it rises.

Not only does the innovation allow for 24/7, highly reliable methane leak detection and quantification over large areas in the field, but it makes the entire operation more cost-effective than current IR methods.

“Besides refining the monitoring capabilities of the mobile dual-comb laser spectrometer, our team will next be attempting to bring the operating cost down to a per-well-per-year price tag of around $300,” Prasad said. “Achieving that goal would make the system affordable for most users.”