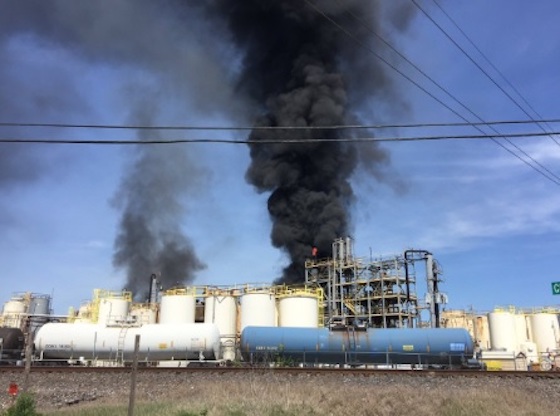 On Tuesday, April 2, at 10:46 a.m., a vapor cloud of isobutylene formed at the KMCO, LLC (“KMCO”) facility in Crosby, Texas after a three-inch cast iron y-strainer, a piping component, failed.

On the day of the incident, more than 200 KMCO employees, contract workers, and visitors were onsite, according to a factual report released by the Chemical Safety Board (CSB). The incident injured at least 30 workers — seven KMCO employees and 23 contract workers. In addition, a shelter-in-place was issued to community members within one mile of the KMCO facility.

The incident interrupted normal business operations at KMCO and resulted in two rounds of employee layoffs, reducing the number of employees at the Crosby facility from more than 180 to less than 50.

The KMCO facility in Crosby, Texas manufactures specialty chemicals and operates tolling facilities. Tolling is “an arrangement in which a company (which has specialized equipment) processes raw materials or semi-finished goods for another company.” KMCO purchased the Crosby plant July 1, 2012 and has owned and operated the facility since.

Isobutylene is a highly flammable, colorless gas, with a sweet gasoline odor. Under certain (temperature and pressure) conditions, isobutylene can be a liquid. Among other things, isobutylene is used in the production of aviation fuel, resins, chemicals, packaging, plastics, and antioxidants for food. Isobutylene is typically transported and stored in a liquefied form, and it is among the gases referred to as LPG, or liquefied petroleum gas. KMCO received isobutylene shipments as a liquid, stored it as a liquid, and fed the isobutylene to its batch reaction system as a liquid.

Later in the morning, an operator was walking by the sulfurized isobutylene batch reactor when there was a loud “pop” sound followed by a loud whooshing noise similar to “an air hose coming off.” 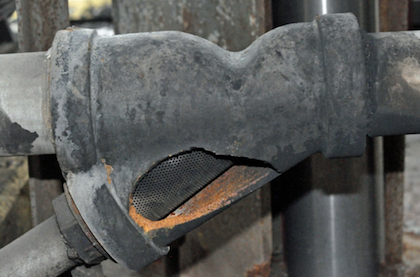 Y-Strainer. This photo shows west side of the failed y-strainer involved with the April 2 incident.
Source: CSB 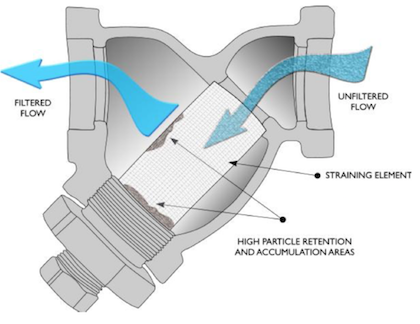 This graphic shows a generic depiction of a typical y-strainer application used to remove solid particles from a liquid stream.
Source: CSB

The operator described seeing a white cloud of vapor hovering near the ground with three to four feet of a wavy, hazy vapor above it, that looked “like a water mirage over hot pavement” or “like if you’re filling up a gas tank and you see the fumes coming out.

In describing the release, a KMCO supervisor said it was like seeing “a two-foot river” of isobutylene vapor “going all the way down the road.”

Call for Evacuation
After identifying the leak as isobutylene, a KMCO operator used the all-call feature on the plant radio system, which allows simultaneous communication on all the KMCO radio channels, to announce: “Attention KMCO, evacuate the reaction area.” Based on KMCO surveillance video, which shows many people suddenly acting with concern and purpose, this radio call to evacuate the reaction area took place at about 10:46 am.

KMCO operators and supervisors then took actions, including:
• Ordering a plant-wide evacuation
• Turning on fire water monitors
• Turning off equipment
• Instructing people using motorized equipment to shut the equipment down and evacuate
• Closing vehicle gates near the release to prevent workers from driving into the vapor cloud

KMCO surveillance cameras visibly shook just after 10:50 am, capturing the time of the explosion.

Worker Missing
KMCO conducted a headcount of its employees, contractors, and visitors and found that one KMCO employee, an operator, was missing. Emergency responders recovered the missing operator near the entrance of a building in the plant that was previously a control room. At 12:07 pm, medical responders evaluated the operator and did not try to resuscitate him. The Harris County Institute of Forensic Sciences autopsy report shows the operator died from “sharp force injuries of the right upper extremity with transection of the right brachial artery and vein” resulting from an “accident.”

KMCO installed a filtration strainer (y-strainer) on the inlet (suction) piping to the isobutylene charge pump. A typical application for a y-strainer is to remove solid particles from a liquid stream. The three-inch y-strainer had threaded ends, and KMCO added flange-to-threaded connections to allow the y-strainer to connect to the isobutylene piping flanges.

Post-incident, the source of the isobutylene release was identified as the three-inch y-strainer on the inlet (suction) piping to the isobutylene charge pump. The y-strainer was found with a hole, which is roughly 3-inches by 5.5-inches, on its west side. A KMCO operator (who saw the release) confirmed the location of the hole was consistent with where he saw the isobutylene escaping.

Strainer Fragment Found
A metal fragment that appears to be consistent with the piece missing from the y-strainer was found on the ground, near the sulfurized isobutylene reactor, and to the west of the y-strainer.

The supplier’s technical specifications confirm the exemplar y-strainer has a gray iron (cast iron) body with an internal stainless-steel strainer.

The CSB investigation is ongoing. Investigators will continue developing the incident causal analysis based on evidence collected during the investigation. Click here for more information on the CSB factual report.