Fire Out at OR Powdercoating Maker 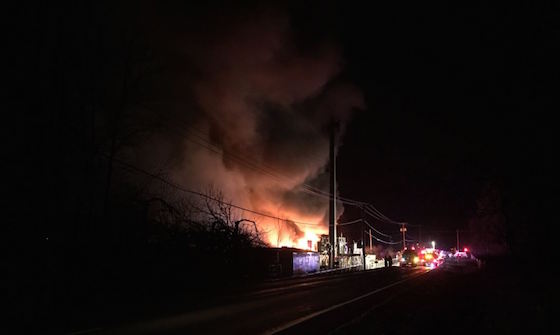 Flames light up the night sky at Armur Powdercoating and Sandblasting after a fire broke out.

Several crews worked to put out a large industrial fire at a powdercoating manufacturer in West Eugene, OR, Saturday.

The call came in at about 5:40 a.m. for a structure fire off Royal Avenue and Greenhill Road where huge billows of smoke wafted into the sky.

Fire crews said it took them about an hour to put out the fire. The fire happened at Armur Powdercoating and Sandblasting shortly after 5 a.m.

The building is used for welding, sand-blasting and powder coating, said Markus Lay, a Batallion Chief with Eugene-Springfield fire.

Crews said it was fully engulfed in flames when they arrived.

They said the metals involved due to the nature of the business made firefighting efforts challenging.

“It’s an industrial manufacturing facility so it’s a more dangerous place just to work when it’s operating like it’s supposed to,” Lay said. “When it’s on fire and it’s dark out and you are unfamiliar with it, you have all those hazards.”

Lay said there was a 1,000 gallon propane tank just north of the building. He said fire crews were able to put out the fire before it reached that tank.

Fire crews were also able to protect the call tower and primary residence, which were both threatened by the fire.

Lay said other challenges they faced while trying to put out the fire was limited access to water hydrants. The nearest one was half a mile away.

Fire crews said most of the damages happened in the processing building and the business office.

Firefighters said there will be smoldering spots at the site over the next couple of days.