Today’s smart grid involves components able to talk to each other, send signals over communication networks to keep power flowing smoothly and efficiently. That communication can work effectively, but a question remains as to when the “conversation” goes quiet.

Along those lines, a team of researchers at the U.S. Department of Energy’s (DoE) Argonne National Laboratory and the Illinois Institute of Technology explored the literature on this link between the power system and its communication networks, finding that many studies do not adequately consider the two-way nature of this relationship and its impact on grid resilience. Understanding that, they wrote a paper entitled “Electric Power Grid Resilience with Interdependencies between Power and Communication Networks — A Review.”

Scientists and grid operators use computer models to understand and plan for how events like storms or equipment failures will affect the electric grid. But when the study authors looked at field reports from actual disruptions, they found complexities that most studies were not capturing.

“There are some gaps between what we are currently modeling and what we need to model,” said Bo Chen, an Argonne energy systems scientist and a co-author of the paper. “We need to better incorporate communication interdependencies into our existing methods.”

The connection between communication networks and the electric grid takes shape in several ways. A utility pole that carries electricity into homes might also carry signals from sensor networks for controlling and data reporting. Grid operations centers need communication networks to monitor conditions and detect problems.

Studies have considered the effect of a network failure on the power system, but not as much the other way around. During Florida’s hurricane season in 2004, for example, a distribution system failure compromised cell phone service, which made it harder for utilities to efficiently dispatch repair crews.

Another potential planning blind spot, Chen said, is the length of battery life for communication devices. If power goes out, how long will their backup batteries run, and do they have enough capacity? The right modeling can provide planning solutions that account for this, with repairs timed to occur before those batteries run out of power. 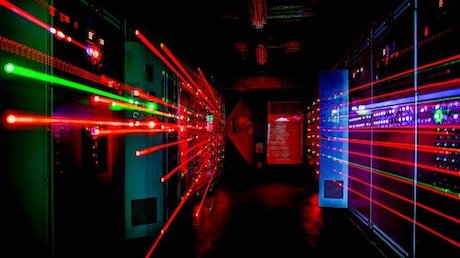 The reciprocal relationship between the electrical grid and communications networks is not well understood so Argonne scientists examined this relationship in depth.
Source: Shutterstock/Mr. B-king

“One type of device that’s really important for distribution system control and power system restoration are the breakers in the substations that can isolate a fault area or energize distribution feeders,” Chen said. “Those substations come with backup batteries that can last for hours, but they need to be restored before battery power runs out to avoid cascading failures.”

Modeling these types of intricacies can be challenging, which is why most studies haven’t yet fully taken them into account, Chen said. Future work will focus on modeling the role communication networks play in the power restoration process after natural disasters. As such models mature, they could also be extended to include electric vehicles, mobile backup generators and other distributed resources that are becoming more common.

“Power systems and communication networks are becoming increasingly coupled as the grid modernizes,” Chen said. “We need to consider every aspect of that link to ensure a stable, resilient electric grid.”

In addition to Chen, Xin Liu and Dong Jin of the Illinois Institute of Technology and Argonne’s Chen Chen authored the study.