There is a new method to pinpoint which electrical service areas will be most vulnerable as populations grow and temperatures rise.

“For the first time, we were able to apply data at a high enough resolution to be relevant,” said Oak Ridge National Laboratory’s (ORNL) Melissa Allen, co-author of “Impacts of Climate Change on Sub-regional Electricity Demand and Distribution in the Southern United States.”

Allen and her team developed new algorithms that combine ORNL’s infrastructure and population datasets with high-resolution climate simulations run on the lab’s Titan supercomputer. The integrated approach identifies substations at the neighborhood level and determines their ability to handle additional demand based on predicted changes in climate and population.

The new, high-resolution capability can explore the interconnections in complex systems such as critical infrastructure and weather and determine potential pathways to adapt to future global change. 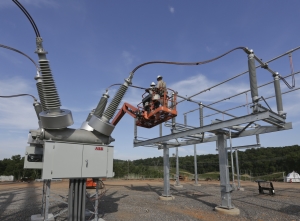 “These results can affect how future service areas are defined and where new substation capacity within the national grid may need to be located,” Allen said.

The authors note the study could inform city leaders and utilities when planning for adjustments or upgrades to existing infrastructure. The analysis also helps decision makers prepare resources needed for population movement in response to future extreme weather events, particularly in the Gulf Coast region. After a natural disaster, such as a high intensity hurricane, tens of thousands could end up displaced to areas ill-equipped to handle the sudden influx of people for an unknown period of time.

For this analysis, the research team examined impacts of population and temperature changes through 2050 in Alabama, Arkansas, Florida, Georgia, Louisiana, Mississippi, Oklahoma, Tennessee and Texas, but Allen said the method could apply to other regions.