While billed as a “challenge,” the organizers of the contest – Stanford University’s Natural Gas Initiative and the Environmental Defense Fund – had no intention of declaring a winner, as the technologies focused on different aspects of leak detection, such as exact location or size of the leak. While the technologies are still in development, overall, they all found gas leaks quite well.

A greenhouse gas, methane is 36 times more potent than carbon dioxide. In 2016, the U.S. Environmental Protection Agency (EPA) moved to reduce methane emissions across the natural gas industry, which spurred the development of faster, less expensive detection technologies. Late last month, however, the EPA moved to roll back these methane regulations.

“The technologies are generally effective at detecting leaks, and can act as a first line of defense,” said Adam Brandt, an associate professor of energy resources engineering and the senior author of the study. “Gas system operators will often want to confirm leaks with conventional optical gas imaging systems, but these mobile technologies usually tell you where to look for leaks very quickly.”

A crew of two people using a conventional imaging system can visit four to six well pads a day. All the mobile technologies are considerably faster than that, though their speeds vary. Plane-based systems work more quickly than trucks, which are faster than drones. Because worker time is a large part of detection cost, speeding up detection allows oil and gas companies to find more leaks while spending less money. 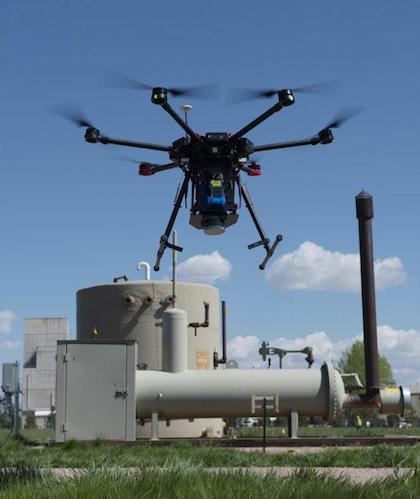 A drone sniffs for methane leaks in the Mobile Monitoring Challenge at the test site in Colorado.
Source: Sean Boggs/Environmental Defense Fund

As part of the Mobile Monitoring Challenge, nine corporations and a university research team participated last year at controlled testing facilities in Fort Collins, Colorado, and near Sacramento, California.

All technologies were effective at detecting leaks. Eight of nine detected leaks correctly 75 percent of the time. (One technology did not have enough flights to be included in the study’s summary.) Five of nine systems detected 90 percent or more of the leaks, including tiny emissions of one cubic foot of gas per hour.

For example, one startup’s drone-based system detected 100 percent of leaks and had no false positives. Further, it accurately identified the leaking piece of equipment, rather than just the well pad, 84 percent of the time. However, when quantifying the size of leaks, the system’s estimates were relatively close just 36 percent of the time. For the other eight systems, by the same relatively strict measure, quantification accuracy ranged from 18 to 53 percent.

“This is only the first step to demonstrating that these technologies could help reduce emissions on a level equivalent to existing approaches,” Brandt said. “The tests were run in the spring of 2018, and I’m sure most, if not all, of these technologies have been improved since then.”

Further advances could be in jeopardy, however.

“The recent U.S. EPA announcement about rolling back methane regulations is not just bad for the environment, but also deprives oil and gas communities of high-paying, local jobs that these innovative technology companies could create. Rolling back the regulations could stifle development of these technologies,” said Arvind Ravikumar, lead author of the study. Ravikumar was a postdoctoral scholar at Stanford at the time of the project and is now an assistant professor at the Harrisburg University of Science & Technology.

Assessment Outcome
An assessment like this can help regulators better understand these systems and provide a possible path to large-scale adoption for compliance purposes, the researchers said. The study examined finding leaks at production equipment that can be found in a gas field, not on finding below-ground leaks that might occur from pipes in cities.

The Mobile Monitoring Challenge was not a head-to-head competition because the technologies tested are designed to accomplish different things.

“No single technology can meet all the requirements for leak detection and quantification across the natural gas supply chain,” Ravikumar said. “The key to large-scale deployment is to match the strength of each technology, like speed, accuracy and cost, with the right leak detection application. What works for a complex processing facility might not work for long-distance transmission pipelines.”

The systems of some participants focus on identifying leaks only as coming from a cluster of equipment, which could include a wellhead, a separator and a tank, for example. In such cases, operators would use optical gas imaging systems or similar technology to identify the specific source of the leak before initiating repairs.

Similarly, two of the technologies tested are designed to quickly find big leaks, rather than all leaks. More than half the methane lost in natural gas production and processing comes from just 5 percent of leaks. Finding and fixing these “super-emitters” is critical to reducing methane emissions.

Even without strict regulations, natural gas companies could reduce emissions voluntarily. Inexpensive detectors combined with focused use of optical gas imaging systems could pay for themselves by reducing losses of company product. This is particularly true in parts of the world where natural gas prices are higher than in North America.