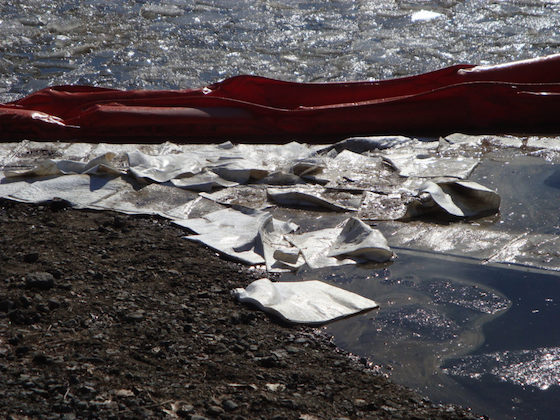 Clean up rags lying on the beach near the spill on Lake Hopatcong in New Jersey.

Jefferson Township Mayor Russell Felter said NJ Governor Phil Murphy called him to say he was well aware of the spill, which occurred earlier this month, and was following the cleanup. The owners of the spilled fuel will be fully responsible for the cleanup costs, Felter said.

The company, Valiant Contracting, hired a contractor and will be billed for the costs incurred by the state and county. Management there said a tank leaked during fueling.

State Department of Environmental Protection (DEP) employees and contractors remain at the site off Prospect Point. They must remove the oil soaked ice and send it to Pennsylvania where it will be burned. Each truckload of oil costs a couple of hundred dollars for disposal.

Melissa Castellon of the State Park said she was informed of the spill by a resident who contacted her about “something on the lake.”

DEP spokeswoman Caryn Shinske estimated recovery and removal of impacted ice is expected to continue for one to two weeks depending on weather conditions.

Castellon said she was informed it was “a couple of hundred gallons of diesel fuel” that spilled. Commissioner Ann Siebert-Pravs, representative of Mount Arlington, noted one gallon of oil could contaminate 200 million gallons of water.

Officials at Valiant told the DEP said there was a diesel spill from one of its fueling tanks about two weeks before the oil was found in the lake and they removed the surface soil, but did not report the incident.

Neither the county nor the state made any statement on possible enforcement actions against the contractor.

Shinske said there was no indication there were any significant environmental impacts as a result of the spill.