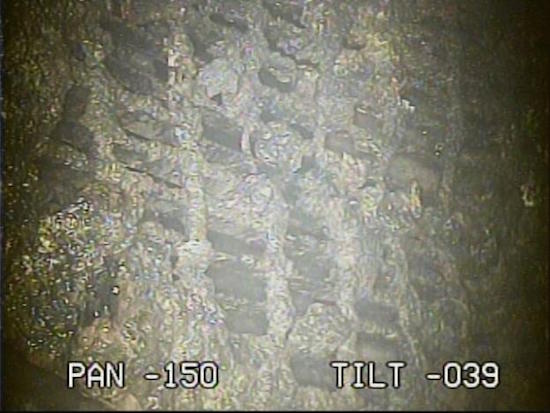 A handout image provided by Tepco from footage taken Monday by a camera inserted under Japan’s wrecked Fukushima nuclear plant, shows material found below the damaged No. 2 reactor at the site.

Tokyo Electric Power (Tepco), the operator of Japan’s Fukushima nuclear plant, said Monday there is a possibility it found nuclear fuel debris below the damaged No. 2 reactor, one of three that suffered meltdowns in the 2011 disaster.

If true, it would mark a significant breakthrough in attempts to clean up the nuclear plant.

Finding the highly radioactive melted uranium rods may pave the way for Tepco to develop methods to remove the melted fuel.

Tepco detected a black lump of material directly below the reactor in an inspection by camera on Monday and could not rule out the possibility of melted fuel, an official told a news briefing.

“This is a big step forward as we have got some precious data for the decommissioning process, including removing the fuel debris,” the official said.

The company will analyze the data to decide whether it could send a robot into the reactor for further investigation, he said.

Three reactors at Tepco’s Fukushima plant melted down after a magnitude 9 earthquake struck off the coast of Japan in March 2011, triggering a tsunami that devastated a large area, killed more than 15,000 people, and flooded back up generators which then caused the reactors to melt down.

About 160,000 people fled their homes after the meltdowns caused explosions that dumped radioactive materials across a swath of Fukushima prefecture.

It took Tepco about two months to admit the reactors had melted down, confirming what experts had been saying for weeks.

Tepco has made some progress, such as removing hundreds of spent fuel rods in one of the damaged buildings. But it has failed to establish the location of the melted fuel rods in the other three damaged reactors at the plant.

The utility has been developing robots that can swim under water and negotiate obstacles in damaged tunnels and piping to search for the melted fuel rods.

But as soon as the robots get close to the reactors, the radiation destroys their wiring and renders them useless.

In December, the government nearly doubled its projections for costs related to the Fukushima nuclear disaster to 21.5 trillion yen ($188 billion).