Small-to-medium-sized foundries across Pennsylvania are learning to transition away from using harmful silica sands in the metal casting process and also reducing costs through 3D printing.

The project is being supported by two grants totaling $140,000, funded by Pennsylvania Gov. Tom Wolf’s Pennsylvania Manufacturing Initiative. The initiative is part of a statewide push to drive new technologies and processes in the manufacturing sector.

Metal casting, a $33 billion industry, provides American workers with nearly 200,000 jobs, according to the American Foundry Society (AFS). Currently, Pennsylvania sits at No. 2 on the AFS metal casting list, which is ranked by the number of reported foundries in each state in the United States.

“This project is close to home for me,” Lynch said. “I grew up in Pennsylvania, and there was a foundry near my town that was a significant source of our economy. I want to help in any way that I can to help keep these smaller foundries ahead of technological curves.”

Due to new regulations from the Occupational Safety and Health Administration, foundries must begin to switch from silica sands to ceramic sands. Silica sand, due to the fineness of its particles, can lead to the development of silicosis — a lung disease caused by breathing in silica. A worker’s exposure to silica particles can cause lung scarring, which affects the worker’s ability to breathe and can lead to long-term issues, such as needing a device for oxygen support.

Different from silica sands, ceramic sands, which are often artificial, are safer due to their spherical shape and rigorous testing to ensure uniform grain, chemistry and physical properties, according to the researchers.

The first grant will send Penn State undergraduate and graduate students, supervised by members of the research team, to work with foundries across the Commonwealth on the deployment of non-silica aggregates in metal casting. Additionally, faculty members will provide webinars for Pennsylvania foundry leadership on implementation strategies and conduct training workshops in conjunction with the Pennsylvania Foundry Association. 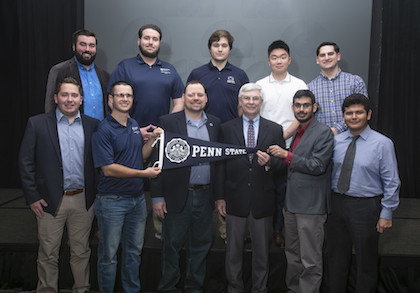 Metal casting provides nearly 200,000 jobs in the $33 billion industry in Pennsylvania, making it even more critical for small-to-medium-sized foundries to stay up-to-date on the changes. Paul Lynch, third from left, Robert Voigt, fourth from left, and Guha Manogharan, second from right, with students from a former project.
Source: Robert Voigt

“It’s a close connection and full-service operation in which we develop, implement, utilize and train,” Voigt said. “Many people can develop new technologies, but it’s much harder to deploy them.”

The second grant, a project being led by Lynch and Manogharan, will focus on the improvement of 3D printing to reduce the costs inherent to metal casting.

Currently, foundries prepare wax patterns for investment casting by injection molding via permanent metal molds. Investment casting is a process in which the wax takes the shape of the metal form but melts away under high heat. Subsequently, wax patterns are dipped in ceramic slurry, a semiliquid mixture, to create a shell. The ceramic is then heated and the wax is retrieved from the new ceramic shell. Once the ceramic has cooled, metal is poured into the shell for the final casting. Once the ceramic is shaken off, the final metal casting is ready.

The casting process is lengthy, expensive and results in just a single metal product at the end. If the design of the object needs to change, a whole new mold must be created. Lynch and Manogharan’s project will work to skip the metal mold process entirely by directly 3D printing the wax molds.

“Now we can print wax, which makes it cheaper, faster and easier for foundries to do their casting,” Manogharan said. “We will be working to develop design methods for next-generation investment casting processes.”

Voigt added these projects could help keep the doors open for Pennsylvania’s small-to-medium-sized foundries that otherwise may have to shut down when they can’t keep up with the changes.