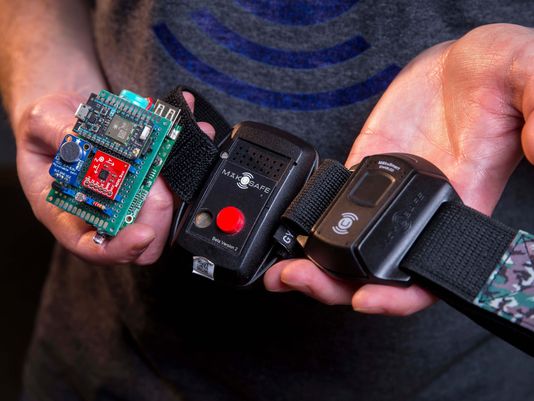 Three versions of the MakuSafe wearable device are shown with the most recent version on the right. The product is a wearable device for factory workers that tracks noise, temperature and movement to help spot accident sites and help prevent slips, falls and catastrophes.

There is a wearable technology designed for factory workers in an effort to decrease workplace injuries and death by tracking working conditions.

The device just received a patent and the company, MākuSafe, is looking to go to market next year.

“This patent is pretty broad-based for what we’re doing,” Gabe Glynn, who created the technology. “If somebody tried to do something similar to ours, we’d have the ability to take action against them.”

So far, the company has raised more than $1.5 million — mostly from local capital.
MākuSafe’s sensors track everything from temperature to sound levels to humidity on a manufacturing floor. The wearable devices automatically note when someone trips or falls.

It’s designed to track near-misses, which experts believe can help predict future accidents but are vastly under-reported in workplaces.

Even in its infant stages, experts viewed the technology as potentially “transformative” for manufacturers, who want to avoid the lost time and additional cost of workplace injuries.

But it also stands to revolutionize the insurance industry.

Since conceiving the idea, Glynn has pushed MākuSafe to the insurance business, rather than proposing to sell directly to factories. Insurance companies can implement the technology as part of their workers’ compensation coverage.

Des Moines-based EMC Insurance is the largest investor in Glynn’s company. In announcing its partnership, EMC executives said the new technology could help the insurer stand out from its competition.

That’s, in part, because EMC writes workers compensation policies. By closely tracking safety conditions in a workplace, it can pinpoint potential problems before they happen and quickly learn from injuries when they occur.

That could potentially lower accident payout costs and premium rates.

Aside from helping to prevent accidents, the product will collect millions of pieces of data. Workplaces can use that data to see how they compare with similar companies.

But the devices won’t track biometric data and will keep the information of individual workers secure, Glynn said.

The plan is to eventually expand beyond factories and to target construction and agricultural facilities such as hog confinements.

MākuSafe can also tie into a factory’s automation system.

“So, if the air quality is being detected as being poor, we can cycle the air automatically,” Glynn said. “We don’t have to wait for a maintenance person to get a notification and go fire up something.”

Once factories adopt it, Glynn hopes his product will be issued alongside workers’ personal protective equipment.