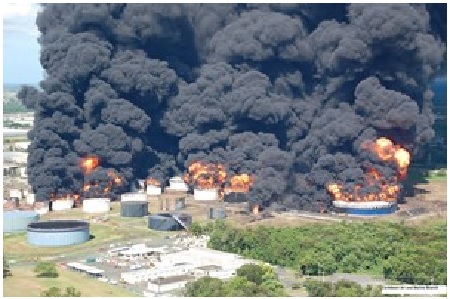 Aftermath of the 2009 massive blast at the Caribbean Petroleum gasoline terminal.

While the blast occurred over six years ago, lessons learned from the 2009 massive explosion at the Caribbean Petroleum (CAPECO) terminal facility near San Juan, Puerto Rico, can apply today.

In a scenario that appeared jarringly similar to the Buncefield, England incident in December 2005, the 2009 incident occurred when gasoline overflowed and sprayed out from a large above ground storage tank, forming a 107-acre vapor cloud which then ignited.

The Chemical Safety Board (CSB) issued a draft report on the incident which includes proposed recommendations for addressing regulatory gaps in safety oversight of petroleum storage facilities by the Occupational Safety and Health Administration (OSHA) and Environmental Protection Agency (EPA). The CSB also released a chilling video shows just how lucky three workers were to be alive after the massive explosion.

While there were no fatalities, the explosion damaged approximately 300 nearby homes and businesses and petroleum leaked into the surrounding soil, waterways and wetlands. Flames from the explosion were visible from as far as eight miles away.

On Wednesday, October 21, 2009, Caribbean Petroleum Corporation began a routine transfer of more than ten million gallons of unleaded gasoline from a tanker vessel docked two and a half miles from the facility. The only storage tank that was large enough to hold a full shipment of gasoline was already in use. As a result, CAPECO planned to distribute the gasoline among four smaller storage tanks. This operation would take more than 24 hours to complete. During transfer operations, one CAPECO operator remained stationed at the dock, while another monitored valves controlling gasoline delivery at the terminal.

By noon the next day, October 22, two of the tanks ended up filled with gasoline. The operators then diverted the gasoline into two other tanks – tanks 409 and 411. At 10 pm the night of the 22nd, as tank 411 reached maximum capacity, operators fully opened the valve to tank 409. According to witness interviews, the supervisor on duty estimated that tank 409 would be full at 1 am. But shortly before midnight, tank 409 started to overflow. Gasoline sprayed from the vents forming a vapor cloud and a pool of liquid in the tank’s containment dike.

“The CSB’s investigation states that there are a number of shortcomings in regulations that cover petroleum storage facilities,” said CSB Board Member Mark Griffon. “Facilities such as CAPECO, which store large quantities of gasoline and other flammables, are not required to conduct a risk assessment of potential dangers to the nearby community from their operations.”

The CSB’s investigation found the measuring devices used to determine the liquid levels in the tanks at CAPECO ended up poorly maintained and frequently did not work.

The facility primarily measured tank levels using simple mechanical devices consisting of a float and automatic measuring tape. An electronic transmitter card would normally send the liquid level measurements to the control room. But the transmitter card on tank 409 was out of service, so operators had to manually record the hourly tank level readings.

“We found that the ‘float and tape’ measuring system was the only control system CAPECO used to avoid overfilling a tank,” said Investigator Vidisha Parasram. “When that system failed, the facility did not have additional layers of protection in place to prevent an incident. The investigation concluded that if multiple layers of protection such as an independent high level alarm or an automatic overfill prevention system had been present this massive release most likely would have been prevented.”

An independent high level alarm could have detected and alerted operators to the danger of an overfill, even if the primary system for measuring the tank level fails, as it did at CAPECO, investigators said. An automatic overfill prevention system goes even further, and can shut off or divert the flow into a tank when the tank level is critically high. These additional layers of protection, however, were not in use at CAPECO.

The draft report recommended the EPA adopt new regulations for facilities like CAPECO to require that flammable storage tanks come equipped with automatic overfill protection systems, and to require regular testing and inspection as well as risk assessments.